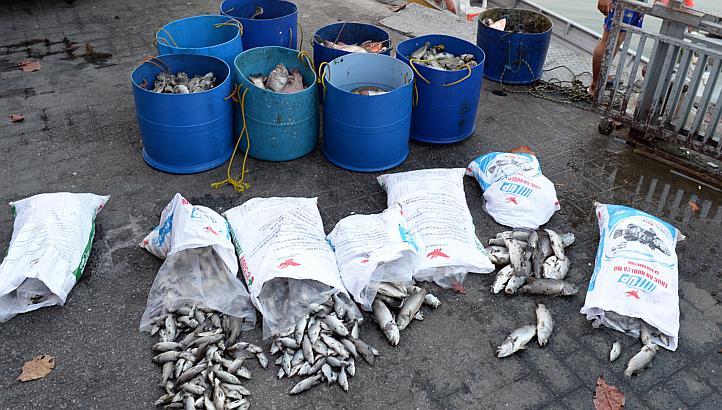 Yesterday, fish farm workers in the Pasir Ris area were seen moving bags of dead fish by boat to the vicinity of Changi Point Ferry Terminal, where a container had been set up for dead fish. – ST PHOTO: AZIZ HUSSIN

Pasir Ris has been hit by mass fish deaths, with farmers there estimating that fish dying by the thousands daily could lead to losses exceeding $1 million.

Several affected fish farmers said the deaths started one or two days before the first day of the Chinese New Year.

Yesterday, fish farm workers in the area were seen moving bags of dead fish by boat to the vicinity of Changi Point Ferry Terminal, where a container had been set up for dead fish.

Fish farmer Simon Ho, 64, said he has lost about 20,000 fish, including Grouper (F. Serranidae) and Silver Pomfret (Snubnose Pompano) (Trachinotus blochii), and could lose almost $50,000. “A lot of us could go bankrupt because of this.”

The Agri-Food & Veterinary Authority of Singapore (AVA) is looking into the mass fish deaths in over 20 farms near Pasir Ris, along the East Johor Strait.

It said causes could include low levels of dissolved oxygen or plankton bloom caused by the hot weather and neap tide, or when the high tide is at its lowest. Plankton blooms happen when micro-organisms in the seawater multiply quickly, draining the seawater of oxygen.

Pasir Ris fish farmers are now trying to stem their losses by pumping oxygen and pouring medicine into the water to increase the immunity of the fish.

The AVA, which has collected samples from the farms for analysis, said it is helping farmers set up aeration systems to pump oxygen into the water.

But affected farmers want help in other areas to keep their business afloat. They said factors like cheap fish from Malaysia will make it hard for them to recover.

Fish farm owner Tang Kwai Leng, who is in her 50s, said she has lost over 3,000 fish. This includes Red Groupers (Coral Groupers) (Plectropomus spp.), which can fetch $40 for 1kg. She said: “This is a black new year for us.”