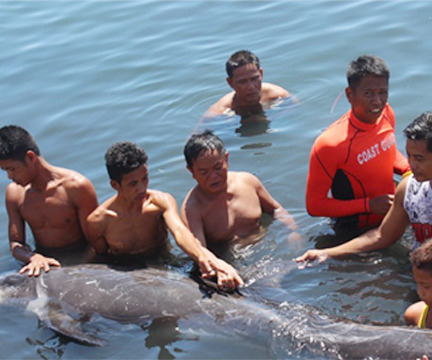 Coast guards rescued a Sperm Whale which was stranded at the shorelines of a village in Antique, over the weekend.

“A disoriented Sperm Whale was beached at the shorelines of Barangay Marina, San Jose, Antique around 9:30 a.m. yesterday,” the Philippine Coast Guard (PCG) stated in a report which was posted on its website yesterday. It measures 546 centimeters in length, 76 centimeters in width and weighs 80 kilograms.

According to the PCG, Ronald Charlie Ledesma, 24, found the distressed mammal 10 meters from the shoreline. He immediately reported the incident to the Coast Guard Station (CGS) in San Jose de Buenavista.

The area was then cordoned-off by the Bureau of Fisheries and Aquatic Resources personnel and volunteer residents until the Coast Guard has successfully guided the Whale towards the deeper portion of the sea 150 meters off the Philippine Ports Authority (PPA) premises.

The Sperm Whale eventually swam off to the ocean.

The photo shows a prominent dorsal fin and pointed flippers, features not found in Sperm Whales (Physeter macrocephalus). If the size reported is accurate (although the weight given seems awfully low), it’s more likely that this was a Short-finned Pilot Whale (Globicephala macrorhynchus) or False Killer Whale (Pseudorca crassidens).