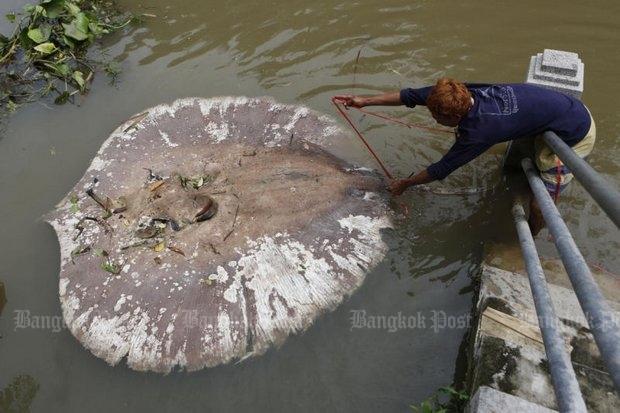 A resident secures one of the 15 dead Giant Stingrays found floating in front of Wat Khu Thamsathit in Khlong Bangkantaek, which is linked to the Maeklong River in Samut Songkhram’s Muang district.
Photo: Pattarapong Chatpattarasill

After dozens of endangered Stingrays died and more aquatic animals went belly-up on the Mae Klong River, why is it that the Department of Pollution Control and related state agencies are still in the dark about what caused the deaths?

Mae Klong River residents and aquatic culture farmers have every reason to feel let down by the pollution control authority, in particular, in this case. Also in the dark is the provincial industrial office which is authorised to regulate factories to ensure they comply with environmental protection rules. It has been almost two weeks since the Stingrays, a rare and magnificent creature that is considered among the largest freshwater fish in the world, started to die in large numbers on Sept 29.

The unusual deaths of the bottom-feeding large-sized Rays that are also classified as being endangered by the International Union for Conservation of Nature should have raised alarm bells with the pollution authority immediately. While it is possible that natural causes could be at play, a more likely explanation for the sudden deaths is that pollution is to blame.

Mae Klong River residents and conservation networks started to detect a possible surge in wastewater volume on Sept 27. There was no word from the authority at that time as to whether water quality in the river remained safe or whether there were any attempts to monitor the situation.

The pollution control authority failed to react even after the death toll of Stingrays increased to more than 20, or after commercially cultured fish and clams were found dead as well. It was only after the damage to the river and aquatic animals provoked an uproar from society that officials from the pollution control department went to collect water samples and sediment from the river.

Lab results of the water samples will not be available until tomorrow. The delay by the officials to react to the possible pollution problem is likely to result in it missing an opportunity to identify what exactly caused the sudden deaths of the Stingrays and other animals, and who should be held to blame.

But that is not the worst that the public can expect from the authority. While suspecting that wastewater discharged from factories located along the river’s course is likely to be behind the sudden death of the endangered species and other animals, the department conceded in the same breath that even with its delayed lab findings, it will be impossible to single out the factory that polluted the river.

The Mae Klong River incident does raise a serious question: What is the use of the pollution control authority if it cannot effectively monitor pollution levels in public waterways, cannot prevent illegal dumping of toxic waste and cannot find any culprits in the event such irresponsible acts occur?

The deaths of the endangered species of Stingray, whose population may have come down to only a hundred or so and become too small for it to be viable in the future, and the damage to commercial aquatic culture industry is a reminder that selfish behaviour seeking personal benefits over the country’s common good still exists.

A more worrying point that the incident has brought to the fore, however, is whether we have an effective mechanism to monitor the violations and to take those responsible for them to task. Considering what has happened in the Mae Klong River, the answer to the question seems bleak.