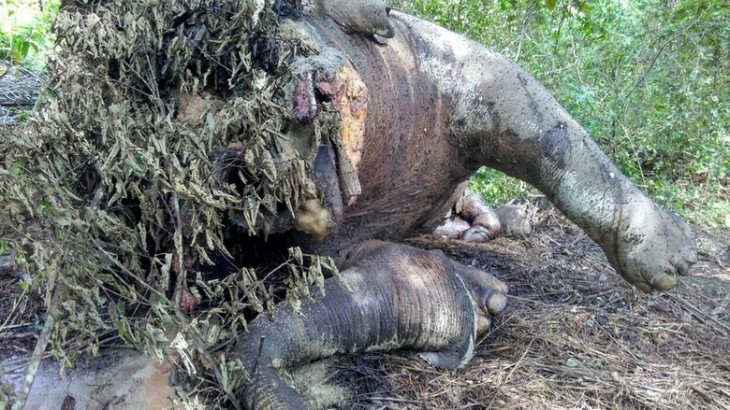 A dead Sumatran Elephant (Elephas maximus sumatranus) was found in an oil palm concession area in East Aceh on Saturday (14/01), according to Aceh Natural Resources Conservation Agency, or BKSDA.

“Autopsy results seem to suggest the Elephant died from being shot – but we are not sure if was deliberately hunted or shot accidentally. There might be other factors,” BKSDA Chief Sapto Aji Prabowo told state news agency Antara on Monday (16/01).

“The Elephant was identified as a male adult aged 30, and when we found the carcass, the tusks were gone,” Sapto added.

The autopsy revealed five bullet holes in the Elephant’s neck and back, though no traces of the bullets were found.

The alleged perpetrator of the Elephant’s murder is still on the run. The case is being dealt with by the police.

The dead Elephant was found by BKSDA officers in the oil palm concession area Dwi Kencana Semesta on Saturday while they were on another Elephant mission of a different nature.

The BKSDA officers were on a rescue mission to save a stranded baby Elephant found by local villagers in Banda Alam on Friday (13/01).

The malnourished Elephant calf has been sent for medical care at the Elephant Conservation Center in Saree, Aceh Besar.