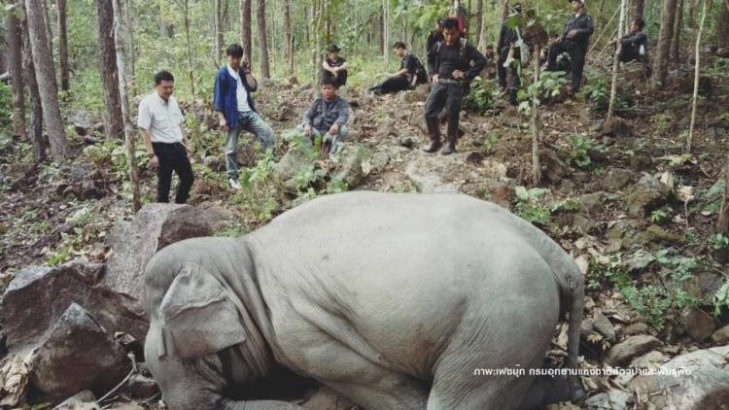 A captive-raised bull Elephant (Elephas maximus) released into wilderness in Lampang province was found dead at the stream near the foot of a hill in Harng Chat district of Lampang province on Thursday morning.

The 37-year-old elephant “Plai Somrak” was freed into the jungle under a programme called “Releasing Elephants Into Nature”.

Plai Somrak was hunted by Doi Phamuang wildlife sanctuary park officials three days ago after it was on musth and turned aggressive ransacking a Mae Pon elephant camp in Harng Chat and attacking the elephants there.

The male Elephant was chased away and officials launched a hunt for it for fear that it might return and harm local people and attack the camp again.

Officials later found it dead at Huey Mae Pon stream with serious bruise on the forehead.

Veterinarian at Thai Elephant Conservation Centre examined the bruise and believed it might skid and fell off the cliff down to the stream.

The fall broke it’s neck, the veterinarian said and added that it would be examined thoroughly again for actual death cause.