A Hawksbill Turtle (Eretmochelys imbricata) was found floating top-side down (carapace down) in the shallows off the coast of Can-upao in Jagna, Bohol on 10 May. A local resident reported it to the police who then brought it to the BALYENA.ORG base and asked us for assistance. The animal was very weak and barely responsive. We kept it comfortable in a shallow make-shift pool with sea water and monitored it closely. Unfortunately, after a few hours the marine Turtle died. It had a curved carapace length of 53cm and had a tag – PH1339J. 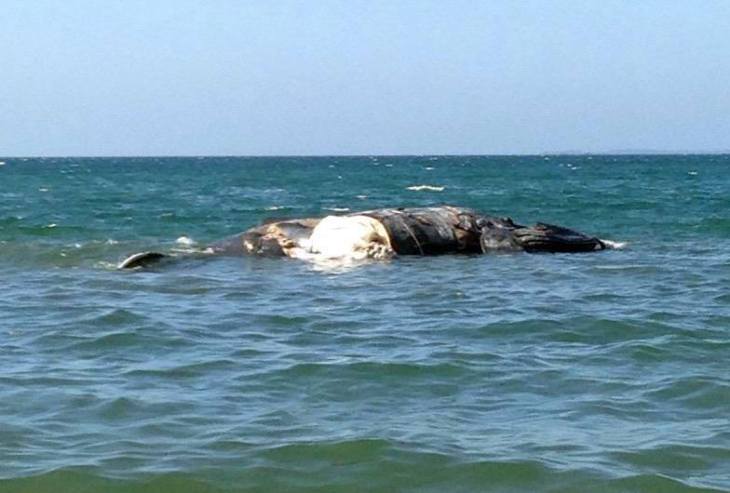 The unidentified Whale that stranded in Candelaria, Zambales last Saturday turns out to be a Humpback Whale (Megaptera novaeangliae). Although already dead, the finding is significant as it is a first record for the area. Thanks to A. Machel for sharing pictures with Marine Wildlife Watch of the Philippines.

Sad news. Last Saturday morning, a dead Humpback Whale was found floating along the coast of Candelaria, Zambales. With the Humpback Whale migration currently underway in the northern Philippines, it is concerning to hear this. Any additional information and photographs will be greatly appreciated.

New findings from a marine group have shed more light on the details surrounding the dead dolphin that washed ashore earlier in Pangdan, Jagna.

According to necropsy reports published on Balyena.org and shared to the Marine Wildlife Watch of the Philippines (MWWP), the Dolphin was a female Fraser’s Dolphin (Lagenodelphis hosei) and not a Bottlenose Dolphin (Tursiops sp.) as earlier reported.

Police and municipal fisheries and aquatic resources authorities earlier erroneously identified the Dolphin as a Bottlenose, measuring an overall length of 2.2 meters and a girth of 37 centimeters.

It had inflicted wounds on its body, more prominent of them has been an identified Cookiecutter Shark bite about five inches from its dorsal fin.

While observers believed the abrasions on the left side of the animal could have caused the death, Balyena.org in their necropsy report stated that the animal had a severe infection of roundworms (nematodes) in its stomach and tapeworms (cestodes) in its blubber and muscles.

“The parasitic infection caused ulcerations in the stomach and most likely led to blood loss and eventually to perforation and peritonitis,” the report which was shared by MWWP showed.

Balyena.org, a non-profit non stock organization conducting Dolphins and Whale research in the Philippines, also added that the two Cookiecutter Shark bites were not the cause of death.

Contrary to what most people think, these oval bites are not fatal.

These sharks, Isistius brasiliensis, or the Cigar Shark, are a member of the Family Dalatiidae or “Sleeper Shark” family.

It is named after the cookie-shaped wounds that it leaves on the bodies of larger fish and marine mammals.

These are also known as the Cigar Shark because of its dark brown and long, cylindrical body shape. It lives in the deep-waters of warmer areas worldwide. Because it emits a greenish glow, it is also known as the Luminous Shark.

The Cookiecutter Shark is considered a “facultative ectoparasite which means it feeds on the flesh of other species causing them harm but not death and it is not dependent on these species for survival.”

The Fraser’s Dolphin that stranded in Pangdan is the second which Balyena.org found there.

Sharing our necropsy findings on the female Fraser’s Dolphin (Lagenodelphis hosei) found dead yesterday morning at Jagna, Bohol. The animal had a severe infection of roundworms (nematodes) in its stomach and tapeworms (cestodes) in its blubber and muscles. The parasitic infection caused ulcerations in the stomach and most likely led to blood loss and eventually to perforation and peritonitis. As much as we would like to share photos of these findings, we deemed it inappropriate for posting. We don’t want to gross people out. The two Cookiecutter Shark (Isistius brasiliensis) bites were not the cause of death (photo shared here). Contrary to what most people think, these oval bites are not fatal. More on Cookiecutter Sharks next! 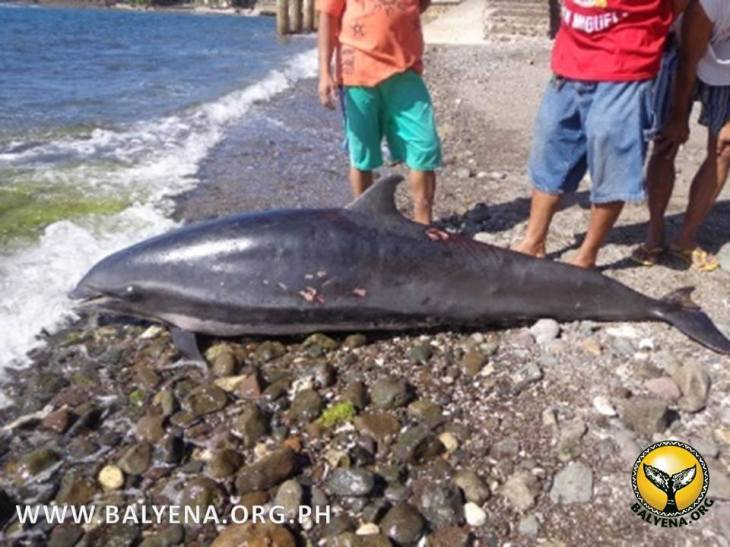 A dead female Fraser’s Dolphin (Lagenodelphis hosei) was found floating in the waters near Barangay Pangdan, Jagna, Bohol this morning. The 2.24m-long animal had Cookiecutter Shark (Isistius brasiliensis) bites on its body. A necropsy will be conducted by Balyena.org staff in Bohol to try to determine the cause of its death.

Sharing a stranding report of what appears to be a False Killer Whale (Pseudorca crassidens). The animal was reportedly found weak and wounded along the shores of Barangay Aguada, Cataingan in Masbate on the morning of the 23rd (Thursday). Despite efforts of locals the animal unfortunately died a few hours later. Thank you for sharing Kate.

A probable Humpback Whale (Megaptera novaeangliae) stranding was reported yesterday (April 13) in Barangay Cozo, Casiguran, Aurora. These photos are from the Office of the Mayor, Municipal Agriculturist and PNP.