A turtle was found dead and trapped in fishing nets along East Coast Park.

It was discovered by wildlife lover Sidi Baker on May 21 at about 4pm.

He noticed the large net in the sea and realised there was a dead turtle trapped inside when he removed the net from the water.

He took to Facebook to share several photos of the turtle, hoping to “create awareness on what’s going in and at our waters and beaches”. 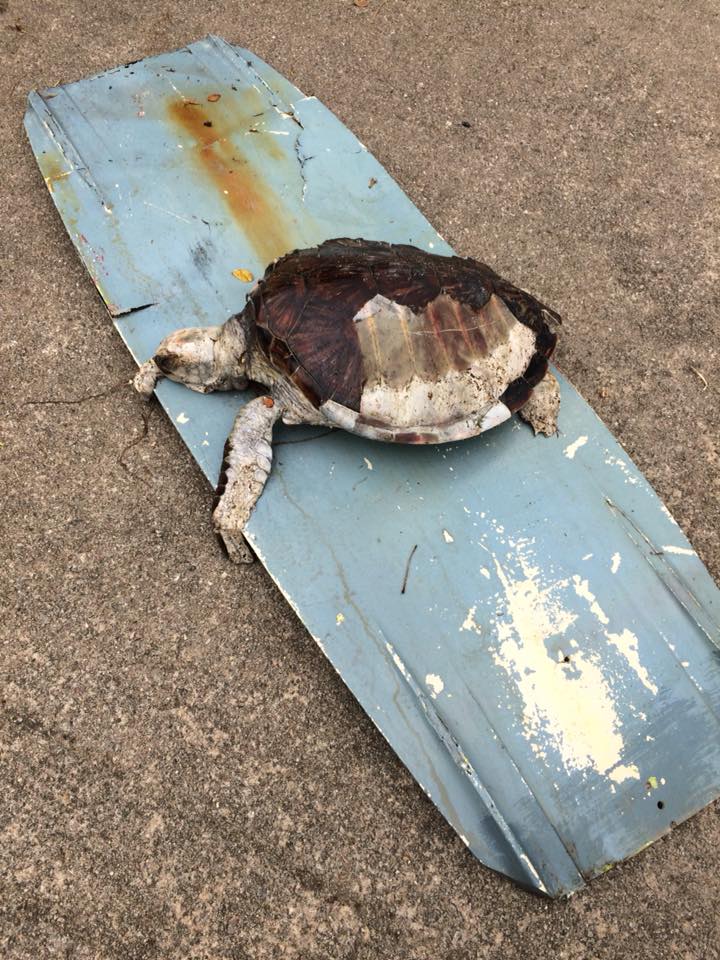 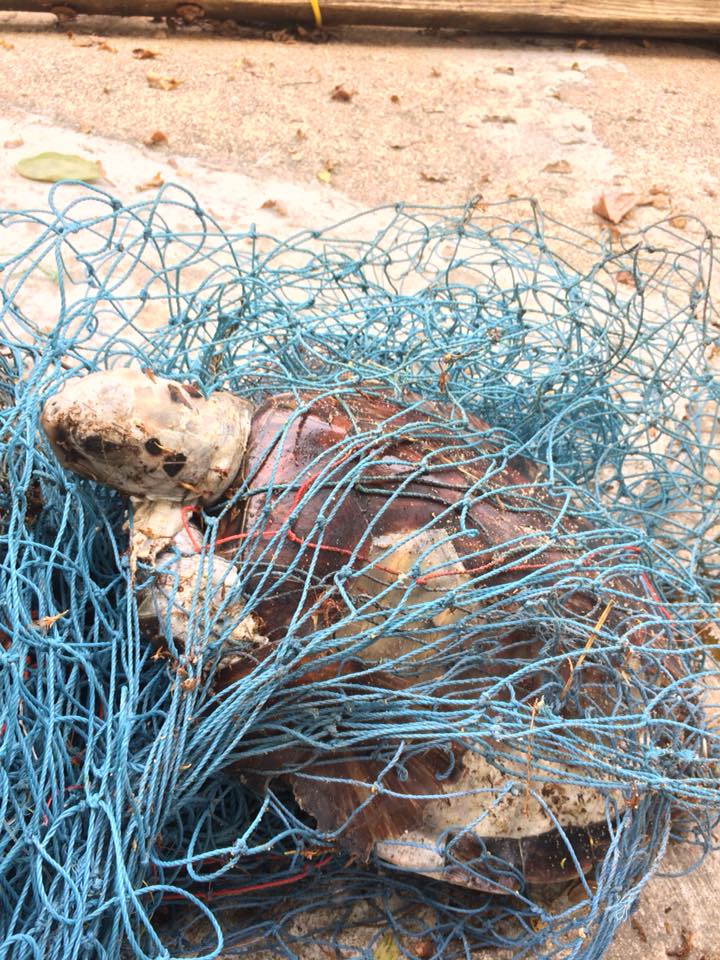 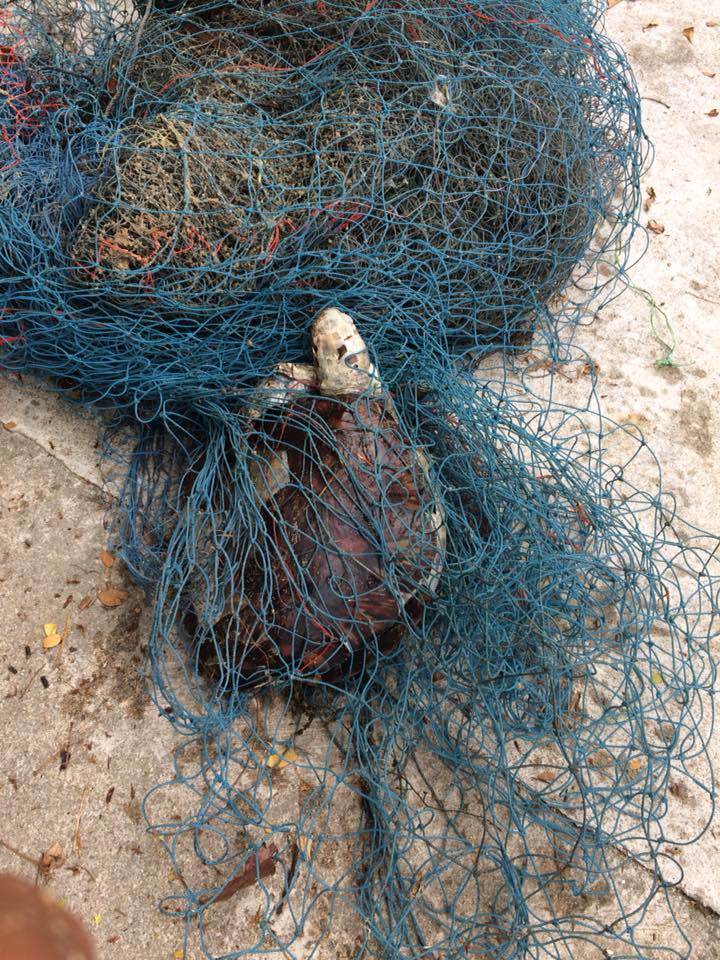 He also said that he cleared the net and buried the turtle.

Baker told Mothership.sg that he helps to remove nets or rubbish at the beach as “it might harm sea creatures.”

He also throws away unwanted hooks and lines.

In Singapore, where animal and human habitats overlap, there have been multiple instances of wildlife being hurt as a result of human activity.

Previously, an otter at Pasir Ris Park was found with a rubber ring around it, and a monitor lizard was seen entangled in a plastic bag along the Singapore River. 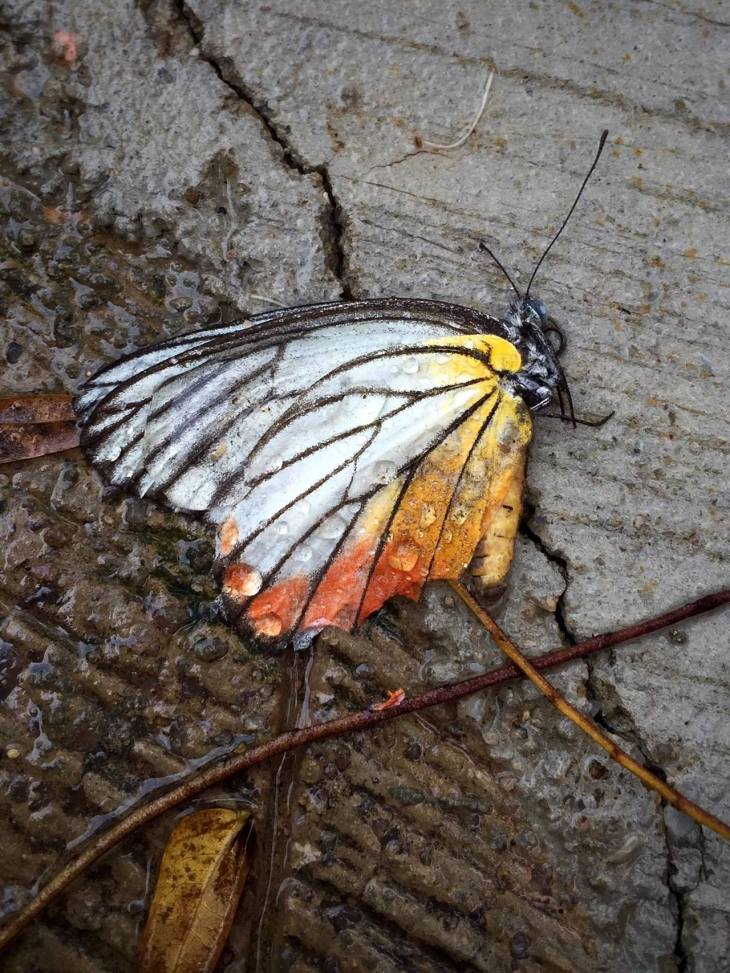 This photo of a dead Painted Jezebel butterfly was shared by Jay Yip on Monday Morgue’s Facebook page.

These photos of a dried Slender Sharksucker were shared by Sabrina Tang. It had presumably been caught by an angler, then discarded and left to die on the jetty. 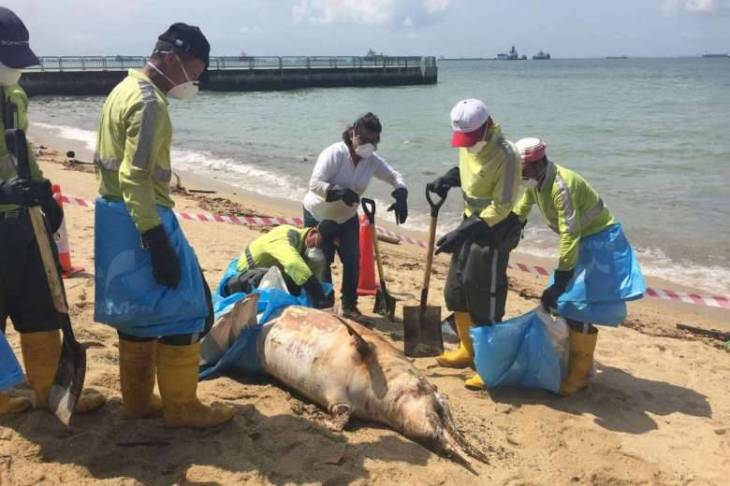 The Dolphin carcass being removed by Ramky Cleantech Services workers yesterday. The workers poured disinfectant over the carcass and the surrounding area. They then wrapped it in trash bags and canvas sheets, before lifting it up with a large canvas bag to a lorry which took it to the company’s Loyang office.
Photo: Ng Huiwen

Museum set to examine Dolphin carcass
Lee Kong Chian museum to decide whether to salvage it ‘for science’ after scrutiny by its researchers
By Ng Huiwen, 8th July 2016;

The fate of the Dolphin carcass that washed ashore at East Coast Park on Wednesday remains unclear as of yesterday, as a local museum looks into whether it is suitable for preservation.

The Lee Kong Chian Natural History Museum said it hopes to “salvage the specimen for science”, though its researchers will have to examine the carcass further before making a decision.

“It is likely that the Dolphin’s skeleton can be processed, but we don’t know for sure yet,” said the museum’s curator of mammals and birds, Mr Marcus Chua.

He has identified the carcass as belonging to an Indo-Pacific Humpbacked Dolphin (Sousa chinensis), also known as the Pink Dolphin. It is the most commonly sighted dolphin species in Singapore waters.

Sales manager Nigel Lim, 36, was cycling with his wife and two children, aged two and four, at about 11am on Wednesday when he discovered the dead Dolphin on the beach next to Big Splash.

“I happened to park my bicycle by the side and walked to see the beach and boats. It looked like a big floating buoy but upon closer look, it was a carcass,” said Mr Lim, who posted a picture of it on Facebook, before a friend alerted the authorities.

When The Straits Times visited the area yesterday morning, flies were seen swarming around the punctured abdomen of the carcass. It appeared to be badly decomposed, with a portion of its tail skeleton exposed.

A dead Dolphin of the same species was found at East Coast Park by beach-goers in July 2014. The carcass was retrieved and handed over to the Lee Kong Chian Natural History Museum, though it is unclear if it was preserved.

At East Coast Park yesterday, workers were seen removing the carcass from the beach to a lorry just before noon, about 25 hours after it was first discovered.

Earlier at about 9.45am, a three-member team from the National Parks Board had cordoned off the area around the carcass. They left soon after.

Later, the carcass was removed by workers from Ramky Cleantech Services. Donning face masks and gloves, they were seen pouring disinfectant over the carcass and the surrounding area. They then wrapped it in trash bags and canvas sheets, before lifting it up with a large canvas bag to a lorry.

Ramky site manager Jenny Khng, who oversaw the operation, said the carcass was taken to its Loyang office, as they awaited further instructions from the authorities.

The Straits Times understands that the museum has since taken over the 2m-long carcass, but the museum’s Mr Chua declined to reveal its current location.

Mr Lim, the man who had stumbled upon the carcass, hopes the museum will be able to keep and eventually display the Dolphin specimen. “Then I’ll have more reasons to take my kids there to see it.”

The skeleton of the Dolphin carcass found in 2014 is currently on display outside the Lee Kong Chian Natural History Museum Public Gallery, next to the Gift Shop.

Fate of Dolphin carcass still unknown more than 12 hours after it was washed ashore on East Coast beach
By Ng Huiwen, 7th July 2016;

The fate of the Dolphin carcass that was washed ashore along East Coast Park on Wednesday afternoon was still unclear by Thursday (July 7) noon.

When The Straits Times visited the beach area near Big Splash at around 8am, flies were seen around the carcass which appeared to be slightly decomposed.

At about 9.45am, a three-member team from the National Parks Board (NParks) cordoned off the 2m-long carcass.

Housewife Therese Stafford, 43, who was walking her dog along the beach at about 8am, said: “I know that there are Dolphins off the coast of Singapore but I’ve always thought they were much further away. It’s unreal to see something like this. And it’s very sad.”

Other beach-goers told The Straits Times that it was their first time seeing a Dolphin carcass on the beach.

It is unclear how the Dolphin carcass got there. It is believed that both the NParks and Lee Kong Chian Natural History Museum are aware of it and will decide what to do about it on Thursday.

Just before 11am, workers from Ramky Cleantech Services arrived at the beach to put disinfectant on the carcass.

Said Ramky Cleantech Services site manager Jenny Khng: “We will be putting disinfectant around the carcass to clean up any bacteria, before the authorities decide what to do with it.”

At around noon, the workers were seen moving the carcass from the beach to a lorry. The Straits Times understands that it will be taken to the Ramky office in Loyang.