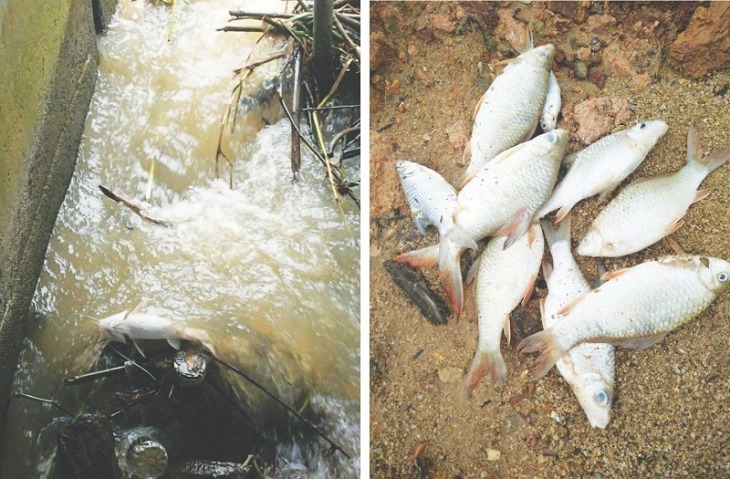 Dead fish found in the Bernam River may be the result of contamination of the water by farms, says Rusna.

Malaysia: Farms along river may be cause of fish deaths in Perak
By Loghun Kumaran, 6th April 2017;

A poultry farm in Kampung Kelawar is believed to be responsible for the large quantity of freshwater fish that has died in Bernam River since last December.

State executive councillor Datuk Rusnah Kassim said yesterday investigations into the source of the contamination led to the farm along Slim River.

However, she said, it was possible it was not the only polluter as there were other farms along the river.

“At the moment, we can only say it may have come from this farm. We are not certain yet,” the Behrang assemblyman told a press conference.

“However, based on our checks, the farm was discharging its sewage directly into the river. We have given the operator until May 31 to improve its sewage treatment system.

"If the rules are not adhered to, we won’t hesitate to shut it down or take further action.”

Rusnah said there had not been reports of residents falling sick from eating fish from the river.

The death of thousands of freshwater fish along the 30km stretch of Bernam River has left local fishermen in distress.

During each of these incidents, scores of fish would swim in an erratic manner close to the surface and would end up dead the next day.

The association believed the contamination was caused by an industrial source, but was unable to pinpoint where the effluents were coming from.

Saiful said some fishermen reported their catch dropped by 70 per cent during these “mass deaths”.

“If the fish start to turn up dead today, we won’t get a good catch for about seven days. This is worrisome for the 200 inland fishermen in this area,” he said.

“It seems like an unending problem because we don’t know how long it will go on. All we know is that something is wrong.”

Saiful said the fishermen had lodged reports with the police, the Department of Environment, the Fisheries Department and the District Office.

Like their colleagues around the country, inland fishermen along Bernam River rake in a fluctuating amount of money a day.

During a good month, they can catch RM 2,000 worth of fish but this number can decrease sharply.

“The fish here are highly sought after for their taste. This is because the Bernam River has largely remained unpolluted until now,” said Saiful.

“We need the authorities to act. They need to find the source of the contamination and shut it don immediately. Our livelihood is at stake.”

On March 27, fisheries officials found “quite acidic” pH levels of 5.8 and an ammonia content of 0.24ppm, which are above the normal levels.

“These are not natural levels. Usually a river should have a neutral or slightly alkaline pH level,” said Bah Piyan.