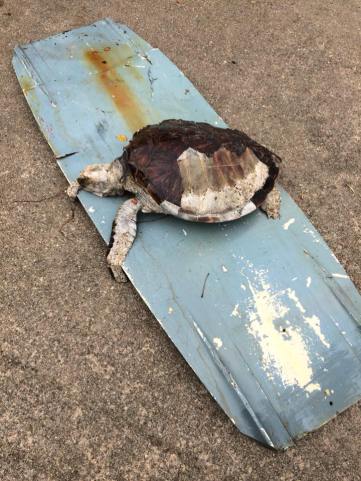 A turtle was found dead and trapped in fishing nets along East Coast Park.

It was discovered by wildlife lover Sidi Baker on May 21 at about 4pm.

He noticed the large net in the sea and realised there was a dead turtle trapped inside when he removed the net from the water.

He took to Facebook to share several photos of the turtle, hoping to “create awareness on what’s going in and at our waters and beaches”.

He also said that he cleared the net and buried the turtle.

Baker told Mothership.sg that he helps to remove nets or rubbish at the beach as “it might harm sea creatures.”

He also throws away unwanted hooks and lines.

In Singapore, where animal and human habitats overlap, there have been multiple instances of wildlife being hurt as a result of human activity.

Previously, an otter at Pasir Ris Park was found with a rubber ring around it, and a monitor lizard was seen entangled in a plastic bag along the Singapore River.

Fishing nets are a threat to the marine ecosystem, which is proven yet again when a group of local fishermen recently saved four Sea Turtles and ending their week of misery of being caught in the fishing nets.

As reported by Kosmo!, the group stumbled upon the distressing scene at roughly 9am on Wednesday (Oct 25) with one of the four endangered marine reptiles in a fragile state as one of its hind legs was almost cut off while its abdomen was bloated.

The captain of the crew, Wan Abdul Halim Wan Mohamed Dom, recounted that they found the trawling net, which entrapped the found Sea Turtles, at 22 nautical miles from the Kuala Kerteh Fisheries Jetty and are convinced that it may have belonged to foreign fishermen.

The 43-year-old went on to elaborate that he along with his three-man crew were on their way to their fishing spot to collect the fish that have been caught, when they came across the foreign trawling net.

“We found a trawling net that was 200 metres long and 10 metres wide. After we pulled it out and cut it open, we found two Green Sea Turtles (Chelonia mydas) and two Hawksbill Sea Turtles (Eretmochelys imbricata),” the captain revealed to Kosmo! yesterday.

While Wan Abdul Halim shared that three of the Sea Turtles have been released to the sea, the severely injured turtle was taken back to the Kuala Kerteh Fisheries Jetty for treatment purposes.

He conveyed to the Malay daily that the Persatuan Khazanah Rakyat Ma’ Daerah (MEKAR) Kerteh has been informed of the discovery of the injured Hawksbill Turtle, prior handing it over to the Turtles and Marine Ecosystem Centre (TUMEC) in Rantau Abang yesterday.

“Based on its physical condition, it’s believed that the Hawksbill Turtle was trapped in the drift nets for a long period of time.

"The aquatic reptile is estimated to be between four and six years old and will be treated until it is fully recovered prior releasing it back to the ocean,” he affirmed.

Mohd Tamimi also underlined that the drift nets are believed to have belonged to foreign fishermen, who invaded Malaysian waters as the Department of Fisheries has banned the total use of trawling nets.

Sinar Harian reported that the officer revealed that many Sea Turtles have swam towards the middle of the sea following Vietnamese fishermen illegally harvesting marine produce mostly in the vicinity of Pulau Tenggol.

“Their illegal actions are damaging the coral reefs, which happens to be the primary ecosystem for Sea Turtles,” he lamented.

“I’m proud of the immediate action taken by our local fishermen to rescue the endangered Sea Turtles, that are protected under the Fisheries Act 1985,” he applauded.

Wan Abdul Halim on the other hand expressed his hope that enforcement measures will continue to improve as a means to ensure that foreign fishermen will not continue to threat out marine ecosystem.

The carcass of an adult Olive Ridley Sea Turtle was found floating along the shore of Barangay Canaoay, San Fernando City in La Union Tuesday afternoon.

According to Rolando Cunanan, he was about to take a bath at the beach when he saw the Turtle.

(When I went there, I saw the turtle. When I saw its head, I knew it’s dead.)

The Turtle weighed between 35 to 45 kilograms. It also had a wound on its head.

The residents believe that the Turtle got entangled in fishing gear. They later buried the dead Turtle.

On October 31, a male Spinner Dolphin (Stenella longirostris) was also washed up the shores in the same area. The residents tried to take it back to the water but it still died.

Based on the Philippine Marine Mammal Stranding Network Database collated and analyzed by the Institute of Environmental Science and Meteorology (IESM) in the University of the Philippines Diliman, there were already 19 species of stranded cetaceans (Dolphins and Whales) recorded in Region 1.

The photo shared on the Barangay Information & Activities Group’s Facebook page, stated to be from Canaoay, shows that the one mentioned in the article is not an Olive Ridley Turtle (Lepidochelys olivacea), but a Hawksbill Turtle (Eretmochelys imbricata).

As we walked back to weigh the trash collected, we find a decaying Sea Turtle on the beach.

Second time seeing a dead Sea Turtle for me. I still haven’t seen one alive in the wild yet.

This carcass is likely to be that of a Hawksbill Turtle (Eretmochelys imbricata.

Only two of the four rare Sea Turtles were still alive when operatives from Barangay San Pedro and the Palawan Council for Sustainable Development arrived in the area where they were found.

According to a witness, the Sea Turtles’ flippers were found bound to a mangrove.

Two of the Hawksbill Sea Turtles (Eretmochelys imbricata) were already dead when operatives from Barangay San Pedro and the Palawan Council for Sustainable Development arrived in the area where they were found.

The Hawksbill Sea Turtle is among those classified as critically endangered species.

According to the authorities, the incident is a violation of Republic Act No. 9147, otherwise known as the Wildlife Protection and Conservation Act.

The surviving Sea Turtles are now in the custody of the Palawan Council for Sustainable Development, which will monitor their recovery.

A female Hawksbill Turtle (Eretmochelys imbricata) was rescued after being hooked at Koh Racha Yai. She was estimated to be around 5 years old, and was approximately 40 centimetres in length and weighed 6.4 kilograms. The hook was removed from her oesophagus, and she was given antibiotics.