Another fish kill blighted Pontevedra in Negros Occidental over the weekend, a second in the town since the first in late February.

Residents immediately alerted local Fishery authorities to investigate the fish kill’s cause, noting that only last February the same incident occurred in a river traversing three other barangays in the town.

They noted that water analysis from the February fish kill have been delayed, and that the Department of Environment and Natural Resources-Environment Management Bureau has yet to determine the cause.

Local officials in Don Mariano Benedicto are monitoring the creek’s situation, saying that the number of dead fish has not increased since Tuesday.

Residents feared the fish kill would affect their livelihood, the report said.

The Department of Environment and Natural Resources (DENR) is conducting an investigation on the discovery of 15 dead Pangolins (Manis sp.) in Barangay 2, Bacolod City, on March 17, the DENR-Negros Island Region said in a statement Sunday.

According to the initial report of the Community Environment and Natural Resources Office (Cenro)-Bago City, a resident found the Pangolin carcasses wrapped in plastic bags around 10 a.m. on March 16.

The resident brought home one of carcasses to be cooked but when he learned that the act is illegal, he returned it to the place where it was found.

Technicians from the Cenro Conservation and Development Section proceeded to the location to verify the incident, with personnel of Bacolod City Police Station 2.

Inspection revealed that the scales of the mammals were removed.

The animals were brought to the Provincial Environment and Natural Resources Office-Negros Occidental for tissue sampling.

The carcasses and tissue samples were then transported to a mortuary in Bago City for further analysis to determine the species of Pangolins and the cause of their death.

Pangolins and Anteaters are included under Appendix I of the Convention in International Trade in Endangered Species of Wild Fauna and Flora. 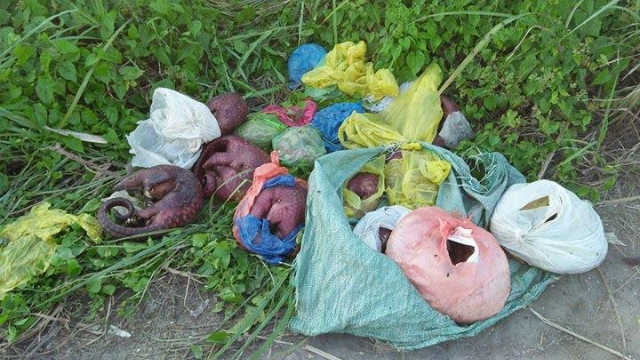 Philippines: Dead Pangolins found in Negros Occidental
At least 15 frozen Pangolins with no internal organs are found at the roadside in Bacolod City
By Marchel P. Espina, 18th March 2017;

Pangolins, or Scaly Anteaters, are considered endangered species that are found in Palawan and other parts of the world.

They are said to be the most illegally traded animal in the world. The Independent reported that there are 8 species of Pangolin that are still in existence in India, China, Southeast Asia, and parts of Africa.

The residents, who are not familiar with the mammals that usually inhabit forests and woodlands, claimed that the 15 Pangolins were frozen and had no internal organs when they were found at the roadside.

Al Orolfo, director of Department of Environment and Natural Resources in Negros Island Region, said the tissue of the Pangolins will be forwarded to DENR’s Biodiversity Management Bureau for DNA testing to determine if they came from Palawan or Malaysia.

At least 7 boxes containing 60 Pangolins, 13 sacks of Seahorses (Hippocampus sp.), and one box of Sea Dragons (Pipefish) (SubF. Syngnathinae) were recovered in the 10-wheeler truck from Bacolod City.

Authorities, however, suspected that the truck originally came from Palawan.

Meanwhile, in Cauayan town, which is more than 3 hours away from Bacolod City, a dead Sea Turtle was washed ashore in Sitio Mabua in Barangay Poblacion on Thursday, March 16.

The Sea Turtle was already in a state of decomposition when it was discovered by the residents. It also had big cuts on its head and flippers.

Dead Pangolins (F. Manidae) were found on a roadside at the reclamation area in Bacolod City Friday, March 17.

Pangolins, also known as “Scaly Anteaters,” are burrowing mammals covered in tough, overlapping scales. They quickly roll themselves up into a tight ball to any potential predator.

They are victims of illegal wildlife crime mainly in Asia and in growing amounts in Africa and are considered one of the most endangered groups of mammals in the world.

Around 5 p.m. Friday, residents found the Pangolins with no internal organs wrapped in plastic bags and placed inside a sack.

Before the report reached the authorities, the Pangolins were frozen when found by a scrap-gatherer Thursday afternoon.

Due to fear, residents failed to report the incident immediately to the Department of Environment and Natural Resources (DENR).

Al Orolfo, regional director of DENR in Negros Island Region (NIR), said in a radio interview that he already directed his personnel to proceed to the area and check the report for investigation.