Another fish kill blighted Pontevedra in Negros Occidental over the weekend, a second in the town since the first in late February.

Residents immediately alerted local Fishery authorities to investigate the fish kill’s cause, noting that only last February the same incident occurred in a river traversing three other barangays in the town.

They noted that water analysis from the February fish kill have been delayed, and that the Department of Environment and Natural Resources-Environment Management Bureau has yet to determine the cause.

Local officials in Don Mariano Benedicto are monitoring the creek’s situation, saying that the number of dead fish has not increased since Tuesday.

Residents feared the fish kill would affect their livelihood, the report said. 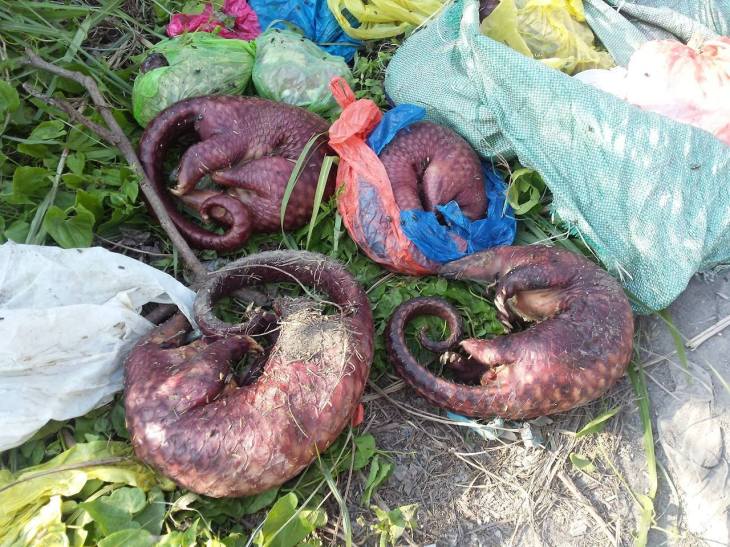 The Department of Environment and Natural Resources (DENR) is conducting an investigation on the discovery of 15 dead Pangolins (Manis sp.) in Barangay 2, Bacolod City, on March 17, the DENR-Negros Island Region said in a statement Sunday.

According to the initial report of the Community Environment and Natural Resources Office (Cenro)-Bago City, a resident found the Pangolin carcasses wrapped in plastic bags around 10 a.m. on March 16.

The resident brought home one of carcasses to be cooked but when he learned that the act is illegal, he returned it to the place where it was found.

Technicians from the Cenro Conservation and Development Section proceeded to the location to verify the incident, with personnel of Bacolod City Police Station 2.

Inspection revealed that the scales of the mammals were removed.

The animals were brought to the Provincial Environment and Natural Resources Office-Negros Occidental for tissue sampling.

The carcasses and tissue samples were then transported to a mortuary in Bago City for further analysis to determine the species of Pangolins and the cause of their death.

Pangolins and Anteaters are included under Appendix I of the Convention in International Trade in Endangered Species of Wild Fauna and Flora.

Philippines: Dead Pangolins found in Negros Occidental
At least 15 frozen Pangolins with no internal organs are found at the roadside in Bacolod City
By Marchel P. Espina, 18th March 2017;

Pangolins, or Scaly Anteaters, are considered endangered species that are found in Palawan and other parts of the world.

They are said to be the most illegally traded animal in the world. The Independent reported that there are 8 species of Pangolin that are still in existence in India, China, Southeast Asia, and parts of Africa.

The residents, who are not familiar with the mammals that usually inhabit forests and woodlands, claimed that the 15 Pangolins were frozen and had no internal organs when they were found at the roadside.

Al Orolfo, director of Department of Environment and Natural Resources in Negros Island Region, said the tissue of the Pangolins will be forwarded to DENR’s Biodiversity Management Bureau for DNA testing to determine if they came from Palawan or Malaysia.

At least 7 boxes containing 60 Pangolins, 13 sacks of Seahorses (Hippocampus sp.), and one box of Sea Dragons (Pipefish) (SubF. Syngnathinae) were recovered in the 10-wheeler truck from Bacolod City.

Authorities, however, suspected that the truck originally came from Palawan.

Meanwhile, in Cauayan town, which is more than 3 hours away from Bacolod City, a dead Sea Turtle was washed ashore in Sitio Mabua in Barangay Poblacion on Thursday, March 16.

The Sea Turtle was already in a state of decomposition when it was discovered by the residents. It also had big cuts on its head and flippers.

Dead Pangolins (F. Manidae) were found on a roadside at the reclamation area in Bacolod City Friday, March 17.

Pangolins, also known as “Scaly Anteaters,” are burrowing mammals covered in tough, overlapping scales. They quickly roll themselves up into a tight ball to any potential predator.

They are victims of illegal wildlife crime mainly in Asia and in growing amounts in Africa and are considered one of the most endangered groups of mammals in the world.

Around 5 p.m. Friday, residents found the Pangolins with no internal organs wrapped in plastic bags and placed inside a sack.

Before the report reached the authorities, the Pangolins were frozen when found by a scrap-gatherer Thursday afternoon.

Due to fear, residents failed to report the incident immediately to the Department of Environment and Natural Resources (DENR).

Al Orolfo, regional director of DENR in Negros Island Region (NIR), said in a radio interview that he already directed his personnel to proceed to the area and check the report for investigation. 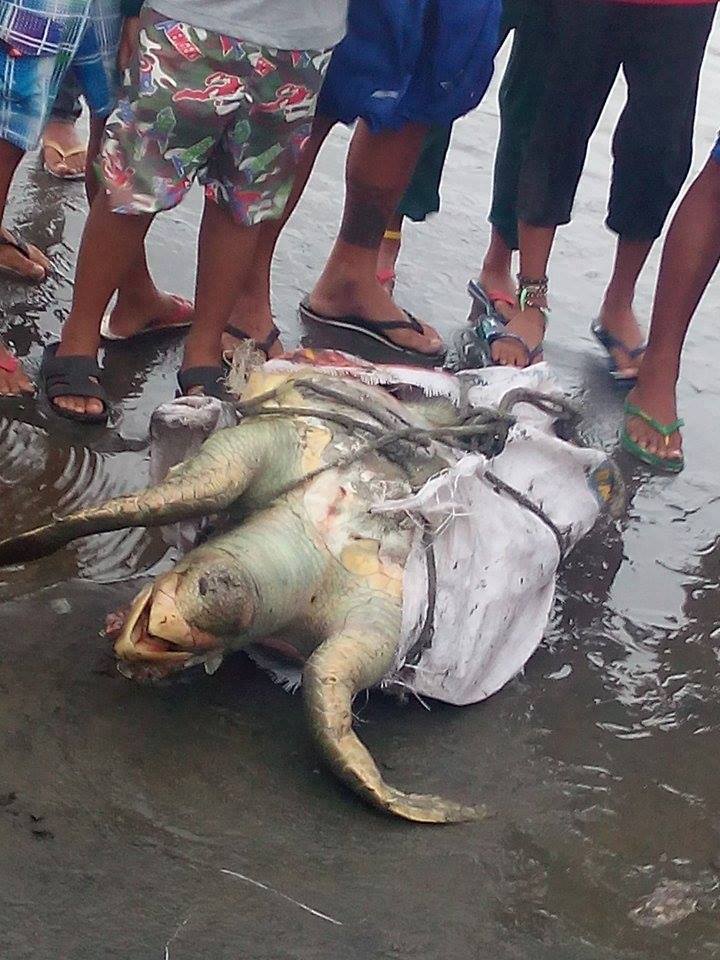 This is the saddest but most moving interaction I ever had with a marine mammal. Last Saturday, we responded to a call for 2 stranded cetaceans (initially reported as Dolphins). When we got to the site, it was already dark and only one was left behind, a Dwarf Sperm Whale (male calf) (Kogia sima). His body had a bite from a Cookiecutter Shark (Isistius brasiliensis), and lesions from corals and rocks. I was on the phone consulting friends who have experiences with marine mammal rescue, and our goal was for it to swim back out to sea. 2 hours later under the stars and glowing plankton in the water, we bid him farewell, hoping he would not come back to shore, that he would heal and find his mom. I was sad because he’s only a calf, and he may not survive if not reunited with his mother. Noon the next day, we received a call again from the village and rushed to the same site. The Whale was back, swimming weak and with more lesions and wounds. When my friends John and Ledrolen (who were with me in the water the night before) waded into the water, the Whale swam towards them as if asking for help. Our hearts were being crushed, not knowing if he will still survive. But we knew he was fighting to live. It was so powerful, how a marine mammal like that can communicate to us humans through their eyes, breathing, heartbeat and body movement. We hoped we could just bring him to a hospital and treat his wounds. One thing that Doc Ari told us to do early on during the response was to talk to the Whale. We were whispering to him with sincere love and encouragement. It may have been silly but it made sense to us. We named him Jafi to honor his personality and to remember him as a friend. Jafi didn’t make it, but we wish to commemorate him by committing to care for all our fellow Earthlings.

Thanks to Bianca and Kaila for the phone support during the response, colleagues in BFAR and Cauayan MAO for coordinating, and to Elenuel Genova of CHMSC for reporting the stranding. I didn’t want to post Jafi’s post-mortem photos for the measurements and all, so if you need those and stranding data, please contact me.

Just a calf, this Dwarf Sperm Whale (Kogia sima) stranded last Saturday at Masaling, Cauayan (about 20km away from Danjugan Island). He had a shark bite, and other wounds possibly from coral or rocks when he beached. We responded upon request of a friend from BFAR, with the help of marine mammal stranding consultants Ari, Bianca and Kaila on the phone. My friends John and Len spent hours on the water with me, as we tried to help the whale swim back to sea. He was able to swim away Saturday night, but got back to shore at noon the next day and we rushed again to the site. He was fighting to survive but eventually lost. Our hearts go with Jafi; we named him because we feel we’ve emotionally connected to him. Now that I’m typing a report about it, I couldn’t help but remember how we were once whispering to Jafi that everything’s going to be alright. 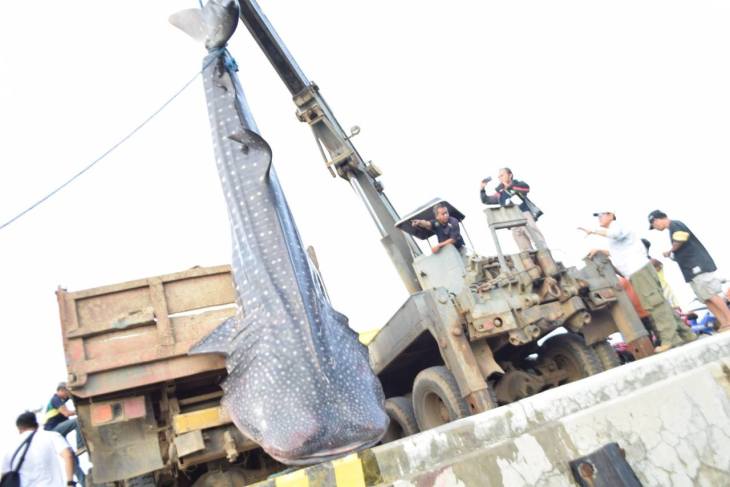 A 17.17-foot Whale Shark (Rhincodon typus) caught in a fishnet off the coast of the Camingawan area in Tañon Strait by fishermen from Barangay Bulanon, Sagay City, died after attempts to release it back into the sea on Wednesday.

Bruises and other signs of physical trauma were also found on the body of the large marine vertebrate Delorino said.

The Whale Shark, locally known as “butanding” or “tuki” was entangled in the drift gill net at around 4 a.m. Wednesday and was towed to the coastline of Brgy. Bulanon, fisherman Ronie Francisco said.

Upon arrival of Sagay Marine Reserve personnel, it was already highly stressed, and despite the attempts to release it, it eventually died and was brought to Old Sagay Port, Delerino said.

He said this type of gillnet makes it difficult to release entangled marine animals.

The marine reserve management also urged the fisherfolk that upon careful assessment of marine creatures, they must be released immediately to the sea and avoid dragging them into the shore.

Crowd control is also important in stranding rescue activity as people have the tendency to take pictures, which adds to the stress of the marine creature under trauma, he said.

Togle added that educating the fisherfolk and the coastal community will be prioritized to avoid similar occurrences.

SMR immediately buried the Whale Shark at the sanitary landfill in Barangay Paraiso.

Whale Shark are considered “Vulnerable” (Note: already upgraded to “Endangered”) according to the International Union for Conservation of Nature.

They are locally protected by RA 9147 or the Wildlife Resources Conservation and Protection Act that covers the protection of all the wildlife resources of our country, especially the threatened and exotic species; and the Fisheries Administrative Order 193, also known as Ban on the taking or catching, selling, purchasing and possessing, transporting and exporting of Whale Sharks and Manta Rays (Manta sp.).