Marine wildlife experts have yet to determine what killed a large Turtle found dead on Kamala Beach on Friday (Aug 19).

Local residents called Kusoldharm rescue workers in Patong after finding the Turtle’s remain washed up on the beach at 10:30am.

The remains were taken to Phuket Marine Biological Centre (PMBC), where experts at the Rare Sea Animal Division are working on determining the animal’s cause of death.

“The Turtle was an Olive Ridley Sea Turtle (Lepidochelys olivacea), about 10-15 years. It weighed about 17.5 kilogrammes,” said Dr Patcharaporn Gaewmong, a veterinarian at the PMBC.

“There were no wounds or injuries on the Turtle’s body, and we believe the Turtle died about two to three days before it washed ashore.

"We are working on what caused the Turtle’s death. Due to the condition of the remains, it is proving very difficult to figure this out,” she said.

An Olive Ridley Turtle (Lepidochelys olivacea) was found dead near the mangrove area in Poblacion, Glan, Sarangani Province on December 05 (Saturday). The turtle has a cut near in its left hind flipper but the cause of which is yet unknown.

“Three of the turtles had severed flippers,” Ms Patcharaporn said.

Experts believe that the turtles were caught in fishing nets and lost their flippers while trying to escape.

“If the waves were mild they would be able to survive in the sea. However, with strong waves like these, they cannot swim well enough with only three flippers,” Ms Patcharaporn added.

According to the PMBC, there have been more than ten injured sea turtles stranded on Phuket’s beaches during this monsoon season, most of them either had severed flippers or were ill from eating plastic bags and rubbish.

“People must stop throwing rubbish into the sea and all fishermen need to be careful with their fishing nets. If you catch a turtle, please carefully release them from the net,” said Ms Patcharaporn. “If they have serious injuries, please call us instead of releasing them back into the sea, so that we can help them.”

Earlier this week, a dolphin died as the PMBC attempted to transport it to their facilities. PMBC staff believe that the dolphin had eaten a plastic bag, ultimately leading to its death

1. This injured turtle was found on Kamala beach today (Sept 17). Photo: Niruj Phuket
2. A rescue worker and swimmers bring an injured dolphin to the shore of Nai yang beach yesterday. Sadly it died before it could be taken to the Marine Biological Centre. Photos: Ekkapop Thongtub
Additional images from Phuket Wan

The recent storms that have hit Phuket have resulted in two injured turtles and two dolphins, one of which was injured and later died, being washed up on three of the island’s beaches over the last three days.

Although the two turtles and one of the dolphins were rescued, sadly, one injured dolphin died before it could be taken to the Phuket Marine Biology Centre.

One injured turtle was washed up on Kamala beach yesterday (Sept 16) and second today (Sept 17). Both were rescued and taken to the Phuket Marine Biology Centre at Cape Panwa where it announced that they were both Olive Ridley Turtles (Lepidochelys olivacea) that had been injured by discarded fishing nets.

Dr Patcharaporn Kaewmong, a vetarinarian from the Phuket Marine and Coastal Resource Research & Development Institute said, “;The turtle we found today is about 10-15 years old and was very sick and weak when it was found on the beach. We are having its blood checked to see if it has an infection.

"It looks like the turtle has had no food for many days. It kept coming back to shore when rescue workers tried to push it back out to sea. The waves were too strong and the weather conditions, due to tropical storm VAMCO, made it worse.

"We think it got trapped in a fishing net which resulted in a cut to its left flipper. It is a good thing that rescue workers transported it here fast. If they hadn’t it would have died,” Dr Patcharaporn said.

“At this time of year the island has a number of turtles which get washed up on the beach. Some have been injured by fishing nets, while some get sick because they have eaten plastic. Some have also eaten jellyfish which causes them to get a blood infection.

"A young dolphin was washed up at Nai Thon beach yesterday, but lifeguards helped push it back out to sea,” Dr Patcharaporn added.

Kusoldharm rescue workers and Phuket Marine Biology Centre officials were called to Nai Yang beach at 4:20pm yesterday to assist with rescuing a dolphin which had washed up on the beach there.

Rescue workers and swimmers helped bring the dolphin to shore where it was found the dolphin had a fresh wound on its right fin.

The dolphin was said to be a female weighing about 80 kilos and between 1.5-2 metres long. Officials from Phuket Marine Biology Centre gave the dolphin medication before attempting to transport it to the centre. However, it died not long after it had been taken off the beach.

Phuket Marine Biology Centre officials said that they will examine the body of the dolphin to find out the cause of death as this is the second dolphin they have found in the past two months which has been washed up on the beach and has died because it was either sick or injured.“ 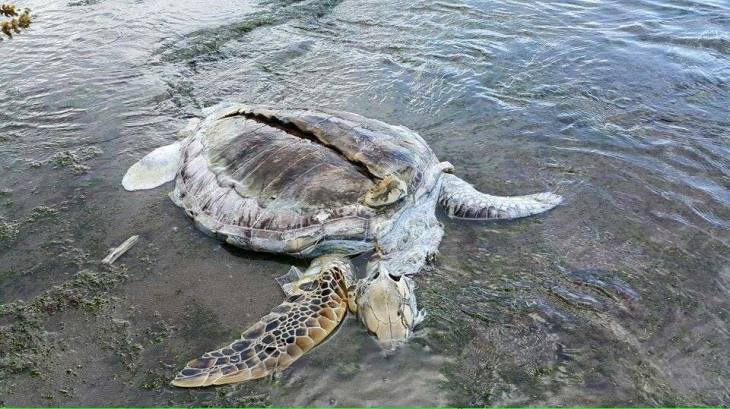 It is heartbreaking for CURMA to have found a mutilated sea turtle (pawikan) on the coast of San Juan, La Union.

Pawikans abound near coastal regions in preparation for their mating and nesting season which is deemed as from Sept – Jan in the West Philippine Sea. So I hope during these months, fishermen will be careful of their zones and jet skis should not be allowed to ply near the coastal zones.

A sea turtle or pawikan was rescued by members of the Philippine Coast Guard (PCG) in Pier 13, Port Area, Manila on Saturday afternoon.

According to PCG spokesperson Lt. Cmdr. Armand Balilo, PCG personnel were making the rounds in Manila Bay when they spotted the turtle.

The turtle was brought to the Ninoy Aquino Parks and Wildlife Center in Quezon City for proper check-up. They will also check whether the animal is wounded or sick, especially since it was found in a polluted area. It will then be released based on the recommendation of experts.

Authorities have yet to determine whether the turtle was washed ashore by huge waves caused by the southwest monsoon (habagat).

This appears to be an Olive Ridley Turtle (Lepidochelys olivacea).

The sea turtle was turned over by the Department of Environment and Natural Resources (DENR) and the police authorities to Davao Light’s community relations manager Fermin Edillon last July 4 after it was found weak and injured along the shore of Bucana.

The turtle was then brought to the Cleanergy Park for it to recuperate from its wounds.

According to the physical examination undertaken by the DENR, the pawikan possibly got its wounds from boat propellers.

Sea turtles are usually attracted to the sound of boat propellers causing them to go near and eventually get hit by it.

Six days after it was rescued, the sea turtle laid eggs while in the repository tub. It is believed that it was about to lay eggs but got injured on its way to the land. Hence, the release of the turtle was scheduled just in time as its wounds were already healing.

“This is the second time the Cleanergy Park has housed an Olive Ridley Turtle, which is an indication that the Davao Gulf is still rich in biodiversity. Now, the park is not only known as a nesting place for turtles but also as a place for saved pawikans. Caring for nature is truly rewarding. I am also happy to note that one of the visitors even offered to give voluntary service for his team to do clean-up or tree planting in the park,” Edillon said.

Prior to the release, the mother turtle was tagged with two labels, PH0133J & PH0134J, for it to be recognized once it comes back. Now, it can continue laying its eggs for a new generation of sea turtles.