One and a half weeks after this dead Oriental House Rat was first seen, all that remained were its skull and several other bones. 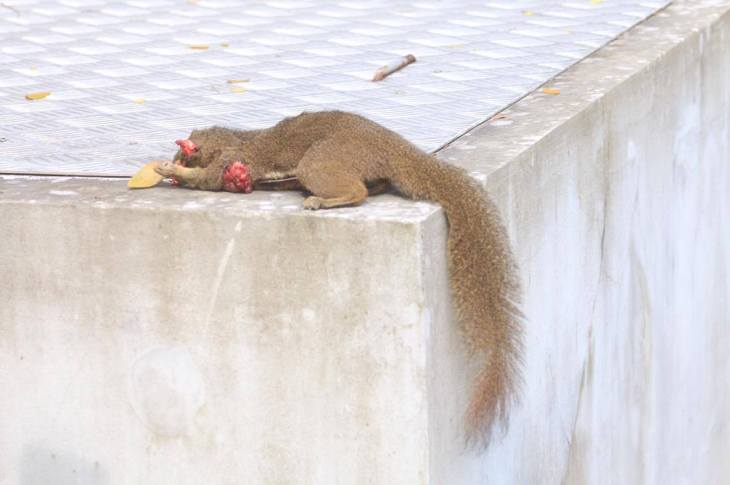 This photograph of a dead Plantain Squirrel was shared by Raphael Siah.

This carcass of a Plantain Squirrel was found by Amanda Kirsten Lek. 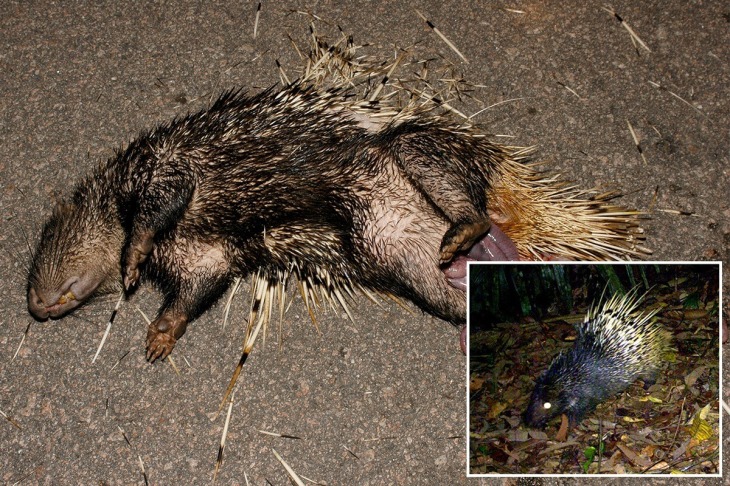 Description of record: An adult (head and body length 60 cm) was found on a metalled road, a victim of traffic road kill (Fig. 1.). The subject appeared to have been crushed in the abdominal region, as indicated by the naked patch extending from its back to its abdomen, and with its innards extruding from the posterior end. The larger quills had become detached from its body.

Remarks: The colour of this specimen appears brownish, in contrast to ‘typical’ examples in which the anterior part of the body is black and sharply in contrast with the white posterior. A typical example from Sungai Bantang, Johor, is shown in the inset to Fig. 1. Similar brownish specimens also appear to exist in Singapore’s central forests, 80 km to the south of Jemaluang (N. Baker, pers. comm.).

One for the @mondaymorgue, an as-yet unidentified rodent carcass from an undisclosable location. Spotted on Friday 11 Dec 2015.

Erica Sena Neves has identified this as likely to be an Asian House Mouse (Mus castaneus or Mus musculus castaneus).

On 12th February 2015, Melinda Chan collected two pellets from Tuas, around the area where the pair of Black-shouldered Kites (Elanus caeruleus) was nesting.

One pellet was larger than the other: 55x30x25 mm as compared to 21x20x15 mm. The larger was oval and very tightly packed in hairs. The smaller was disk-shaped, 21x20x15 mm, also covered with hairs but not as tightly packed.

The larger pellet was somewhat smaller than an earlier one that contained a complete skull, believed to come from a Common Barn Owl (Tyto alba).

However, on dissecting this larger pellet, there was no skull, only bone fragments from the head that included jaw bones, loose molars, an incisor, vertebrae, etc. But there was no complete skull. So in all probably the pellet came from a kite that had fed on parts of the mouse head and not from an owl.

We believe they fell from the nest when brought in by an adult. We had observed that within minutes on the ground the dead mice would be covered with ants. Thus returning it to the nest would introduce ants and pathogens. Another reason these fallen mice were not retrieved can be that there were no shortage of mice in the area.

Melinda Chan made extensive collections of pellets from a tree-lined avenue in Tuas in January 2015. All pellets were covered with short grey hairs, most probably those of mice. One of these was larger than the rest, from which a near-complete skeleton of a mouse was extracted. This was the only pellet that had an intact skull, all others had bone fragments and numerous loose teeth but no skull.

This large pellet was thought to have come from a Barn Owl (Tyto alba). The others, all smaller, were believed to have come from the nesting pair of Black-shouldered Kite (Elanus caeruleus), most probably the chicks.

However, an initial examination of four pellets left a big question mark on the identity of the prey – as no skull was found. The presence of numerous molars and bone fragments that had holes of various sizes and shapes, added to the mystery of the prey identity. After all, the mouse bone fragments failed to deliver any loose teeth and these strange “holey” fragments.

Subsequently 14 pellets were examined following earlier protocol. No complete skull was found in any of hese pellets. Many had the same types of fragments found in the earlier four pellets. In addition, pieces of jawbones with some teeth still attached were found and there were numerous loose teeth, molars actually, as well as incisors. An attempt has been made to label some of the bone fragments.

Of the pellets collected from an avenue at Tuas earlier by Melinda Chan , one was prominently larger than the others (70x40mm). It was also darker and more compact. Preparation of the pellet for harvesting of bone fragments followed the earlier protocol.

The presence of a skull with the characteristic positioning of the incisors and molars, with a wide space in between (above), confirms that the bones belong to that of a rodent, most probably a mouse as the molars have cusps.

The casting of pellet by certain groups of birds is not too well known– see here for more information. After swallowing their prey, these birds regurgitate the indigestible parts that were compacted in the gizzard in a form of pellets. These pellets collect on the ground below the trees where the birds normally perch. Ornithologists collect and study pellets to get information of what the birds had been eating.

Of late, Melinda Chan had been collecting these pellets while Chan Yoke Meng was busy photographing the Black-shouldered Kite (Elanus caeruleus) along the tree-lined avenue in Tuas.

The image of the the exposed pellet clearly shows the bleached bone fragments.

Together with the pellets on the ground were carcasses of half-eaten rodents.