Social media was abuzz after the mutilated remains of a Malayan Tapir (Tapirus indicus) was found at Taman Desa Saujana, Batu 14 Hulu Langat yesterday at 1:30am – triggering speculations that the endangered species may have died in a rescue mission gone wrong.

An earlier footage of a Tapir being subdued with ropes while it was wildly thrashing around with a Bomba vehicle spotted in the background has stirred speculation over what had happened.

The incident, which went viral, caught the attention of Channel News Asia (CNA) correspondent, Sumisha Naidu, who took to social media to express her concern and woe over the heart breaking incident.

“This is appalling and heartbreaking. I do not know what happened yet but official investigations are ongoing. I will also say I KNOW there are many good people at Perhilitan – but whatever happened here is just…” she wrote in a Facebook posting yesterday (Oct 25).

“Please remember that most of the time these animals are more afraid of you than you are of them. Tapirs are herbivores, they have bad eyesight, they’re usually harmless unless they feel threatened.”

However, investigations conducted by the Department of Wildlife and National Parks (PERHILITAN) unearthed that the Tapir wandered into a nearby residential area after escaping from a forest reserve, which prompted civilians to contact the Fire and Rescue department.

“The Tapir’s death will affect the population of the wildlife, and therefore we take this matter seriously,” PERHILITAN Director Datuk Abdul Kadir Abu Hashim criticised the incident, and reminded that the public should not take arbitrary measures to save endangered animals, Harian Metro reports.

“However, the cause of death will be determined once the post-mortem report is out,” he said.

Additionally, Abdul Kadir relayed that the investigations are currently underway and underlined that the perpetrators will be convicted under Section 68, which carries a fine of up to RM100,000 or imprisoned for up to three years.

Preliminary investigations found that the carcass of the Tapir had some parts of its body such as ears, front leg, trunk and skin, mutilated.
Photos: Khairul Azri Facebook

Malaysia: Mutilated Tapir may have been strangled to death
26th October 2017;

The Department of Wildlife and National Parks (Perhilitan) has initiated an investigation into an adult male Tapir’s death that happened yesterday.

Its director-general Abdul Kadir Abu Hashim said preliminary investigations by the department found that the carcass of the Malayan Tapir ( (Tapirus indicus) located at Taman Desa Saujana, Batu 14, Hulu Langat had some parts of its body such as ears, front leg, trunk and skin mutilated.

Abdul Kadir said based on interviews with residents of Taman Desa Saujana and the security guard on duty that night revealed the Tapir had initially wandered into the neighbourhood and later fell into a drain.

“In an effort to rescue the Tapir, the residents had contacted the Malaysian Civil Defence Force (APM), Fire and Rescue Department and the police.

"The rescue operation carried out by the APM and Fire and Rescue Department ended at 1am but had left the Tapir dead and its carcass was abandoned at the scene. Residents were present during the rescue operation,” he said in a statement.

Perhilitan had also voiced its concern over the death of an adult Tapir, as it has an impact on wildlife population in its habitat.

“The Tapir’s cause of death will be determined through a post-mortem.

"However, the initial observation of the Department has hinted that possible cause of death was due to stress and inappropriate rescue methods.

"From pictures sent to us by residents, it can be seen that three length of ropes were used and tied around the Tapir’s neck to pull it up,” he said adding it could have been strangled to death.

Abdul Kadir reminded the public to not take matters into their own hands and contact the nearest Perhilitan branch to seek wildlife rescue assistance especially if they encounter any large mammal or endangered species.

Ill treatment of wildlife is punishable under Section 86 of the Wildlife Conservation Act 2010 (Act 716) and if convicted, the offender can be fined of up to RM50,000 or imprisoned up to one year or both.

“In addition, Tapirs are a fully protected species under Act 716 where taking and keeping a fully protected wildlife is an offense under Section 68 and those convicted can be fined up to RM100,000 or imprisoned up to three years or both,” he said. 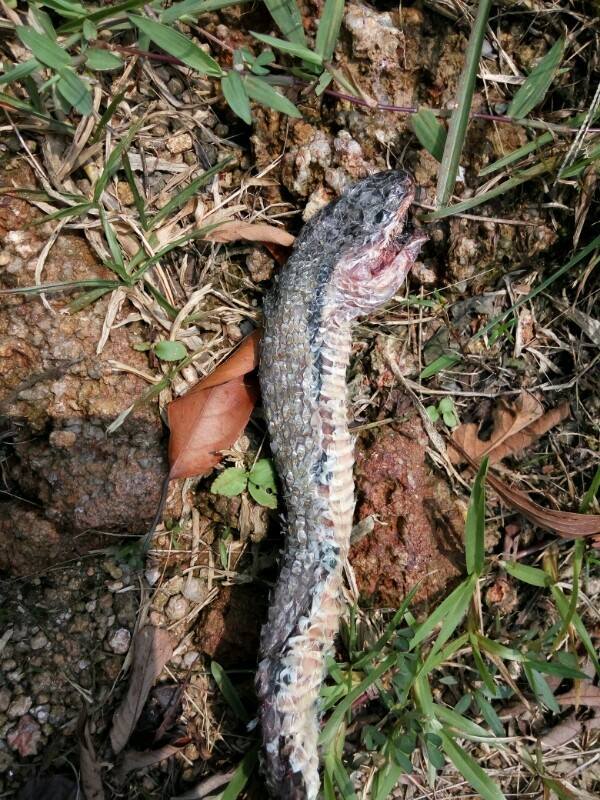 A Roadkill Record of a Hairy-Nosed Otter (Lutra sumatrana) from Selangor, Peninsular Malaysia

Abstract A fresh Hairy-nosed Otter roadkill was encountered along the Tanjung Malim-Sungei Besar Road in northern Selangor (Malaysia) in 2005. This appears to be the first fresh record of this elusive species from Selangor since 1929.

Quite a stench: The dead fish found in a monsoon drain in Taman Putra, Ampang is worrying residents.

The discovery of more than 1,000 dead fish in a monsoon drain in Taman Seraya, Ampang last Saturday has got residents in two neighbourhoods worried.

It is believed to have originated from a waste water treatment facility and oxidation pond belonging to Indah Water Konsortium (IWK) Sdn Bhd at Taman Seraya.

Teratai assemblyman Tiew Way Keng, who highlighted the issue, said the matter was a cause for concern as residents in Taman Seraya and adjacent Taman Putra claimed to have seen foreigners collecting the dead fish.

“This is very worrisome as we do not know if they are consuming the fish or even selling them at the nearby market,” she said, adding that the fish was a type of Tilapia (Oreochromis sp.) species.

Ampang Jaya municipal councillor Jason Lim claimed that the problem had been occurring for many years.

“Twice a year, we usually see the dead fish in the monsoon drain along Jalan 19 and Jalan 22. Not only that, the residents have to put up with the stench,” he said.

Taman Putra resident How Kee Hong, 56, said although it was rare to see the dead fish, it was the overflowing of the sewage drains that was the main problem.

“Whenever it rains, the manholes along Jalan 22 will overflow and the waste water is washed into our compounds. It becomes very filthy and we have to spend the day cleaning up,” she said.

IWK Communications senior manager Shahrul Nizam said there was evidence that the perimeter fence of the oxidation pond had been tampered with.

He suspected that some unscrupulous people had entered the area to catch the fish.

“We think they may have poured some sort of chemical into the water to make them float.

"We are still investigating the matter but in the meantime, we will tighten security to ensure this does not happen again,” Shahrul said.