This White-spotted Slug Snake carcass was found on a park connector, possibly killed after being run over by a cyclist. 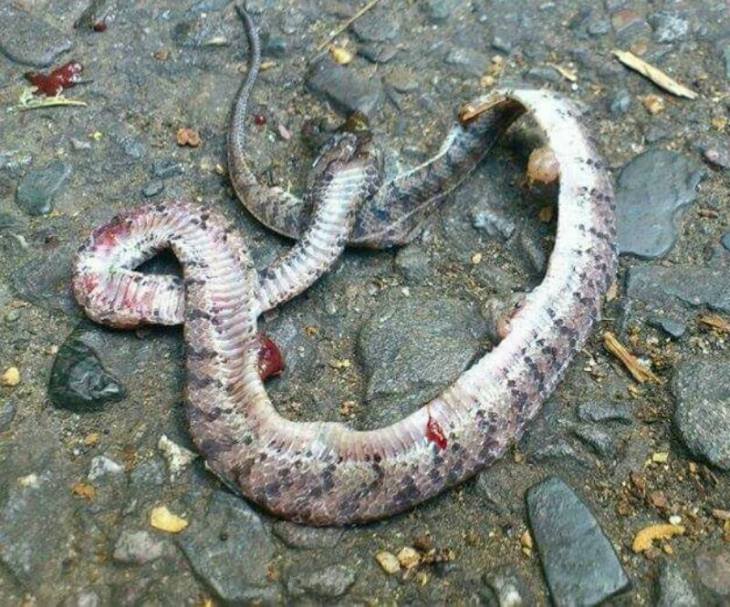 Observation: An example of 33.6 cm total length (Fig. 1-6) was found on the road. It had clearly been run over by a vehicle – the head, body and tail were all crushed to varying degrees, and had become dessicated under the sun, such that there was no smell of decay.

Remarks: The present example may have been run over by a vehicle the previous evening, or even a few days before due to its dessicated state. It may have ventured onto the tarmac for warmth, or attempted to cross the road from one patch of secondary forest to another. The specimen has been deposited in the Zoological Reference Collection of the Lee Kong Chian Natural History Museum at the National University of Singapore as ZRC 2.7079. Scale counts taken from the specimen agree with the information provided by Tweedie (1983: 38, as Pareas laevis) and Manthey & Grossmann (1997: 308, as Pareas laevis).

This is the second specimen of Aesthenodipsas laevis known from Singapore. It has been mentioned by Tan (2014) but without detailed information and the specimen was not illustrated. Lim (2009) found the first Singapore specimen in 1978 in a drain within the compound of the Singapore Zoo. Unfortunately that specimen, although kept, was misplaced and subsequently lost. The location of this second specimen lies some 4.2 km south-east from the first.

The Smooth Slug Snake specializes in eating terrestrial molluscs and is known to attain a maximum size of about 60 cm. It is distributed in the Malay Peninsula, Sumatra, Borneo and Java (Manthey & Grossmann, 1997: 308, as Pareas laevis). Based on its size, the present specimen appears to be a young individual. Given that the species is found in territories around Singapore, it is most likely to be native there. We propose that its status in Singapore be updated from ‘indeterminate’ (Baker & Lim, 2012: 171) to ‘extant indigenous’.