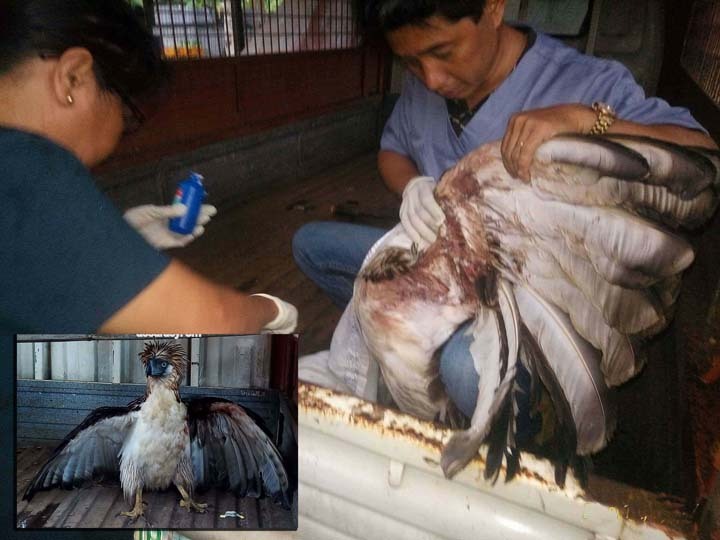 A veterinarian provides initial treatment to the injured Philippine Eagle.

The members of the DENR-Caraga enforcement division acted with dispatch and provided initial treatment to the raptor after receiving a report of the rescued Eagle’s condition.

The Philippine Eagle, the Philippines’ national bird, is the largest bird of prey in the world and it is endemic to the Philippines. It can be found in four major islands namely, Eastern Luzon, Samar, Leyte and Mindanao.

The DENR-Biodiversity Management Bureau believes there are less than 400 pairs of breeding Eagle left in the wild although there are recent reports of sightings of juvenile Eagles mostly in Mindanao.

Habitat loss, hunting for food and trophy and illegal wildlife trade are among the reasons for the species’ population decline.

The rescued Eagle was suffering from a broken wing, a potentially fatal injury, after when rescued by residents in the mountainous village of Anahao Daan, it was learned.

DENR-Caraga Officer in Charge Director Charlie Fabre said the raptor was turned over to the PEC, a day after it was rescued.

He said the bird’s cartilage bone on its left wing had to be cut off “to save its life.”

According to Forester Modesto Lagumbay, chief of the local enforcement and wildlife division, residents found the 4-kilogram Eagle limping along the riverbank and turned it over to Barangay Chairman Datu Aralito Enriquez.

Enriquez brought the Eagle to Mayor Rogelio Pimentel, from whom the DENR team retrieved the raptor.

The wounded Eagle had to be brought fast to an Eagle sanctuary in Davao City, where the veterinarian had immediately performed a surgery on it, Lagumbay said.

“Most likely, the Eagle must have been caught from a snare and struggled to get free and wounded its wing in the process,” Lagumbay added. The Eagle, estimated to be around two years old, will be released once it has fully recovered from injury.

A 3.3 meter Pygmy Sperm Whale (Kogia breviceps) (to be confirmed) stranded yesterday afternoon in Libjo, Dinagat Island, Surigao del Sur. First responders are currently attending to the animal while the veterinary team of BFAR 13 are not yet on site.