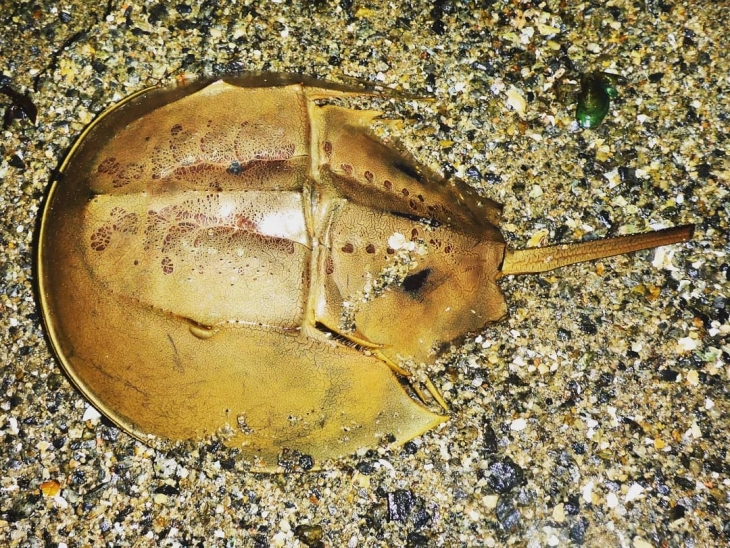 This female Coastal Horseshoe Crab appears to have died while it was still carrying eggs.

This Coastal Horseshoe Crab had been entangled and killed in a discarded fishing net. 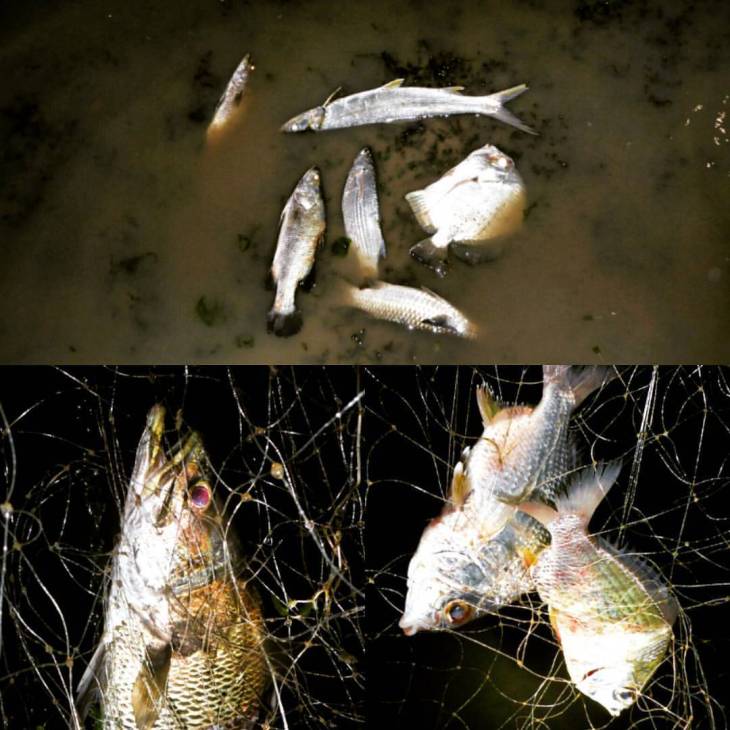 Fishing isn’t allowed at Chek Jawa; the waters here provide a safe haven and refuge for marine life, especially for species that are heavily targeted and exploited by anglers and fishermen in nearby areas. Research has shown that having marine protected areas can actually boost catches elsewhere, a win-win situation for both conservationists and fishermen. Even so, this doesn’t stop unscrupulous people from breaking the law.

What was supposed to be an intertidal survey turned into a marine life rescue and net removal session; a long driftnet, about 200 metres in length, was found, and had trapped a large number of marine creatures. This net was laid across an expanse of seagrass that had signs of recent Dugong (Dugong dugon) feeding activity; Dugongs are endangered in the region and highly vulnerable to getting entangled and drowned in fishing nets.

The Crabs and Horseshoe Crabs, though badly entangled, were still alive and were quickly cut free, but most of the Fishes were already dead or dying. Thankfully there were plenty of hands available to help out with the removal and disposal of the net. Catching fish may be a hobby or a livelihood for many people, but it should not be done in flagrant disregard for the few coastal areas set aside for the protection of often fragile marine ecosystems.

Neptune’s Cup Sponge (Cliona patera)
This huge sponge is shaped like a wine glass, and can grow up to a metre in height and diameter. First described from specimens collected from Singapore in 1822, and heavily harvested in the 19th century for museums and private collections, this huge sponge was last recorded locally in the 1870s. After more than a century without any new sightings, it was feared to have become extinct. However, the species was rediscovered in 2011, when a couple of juvenile sponges were discovered in the waters off St. John’s Island, and only the second time the Neptune’s Cup has ever been observed in-situ. It is possible that there are more of these sponges, even adults, waiting to be discovered in our waters.

Knobbly Sea Star (Protoreaster nodosus)
This is one of Singapore’s largest sea stars, and can be found in seagrass and coral rubble and adjacent sandy areas. Where conditions are right, these sea stars may be densely distributed, with up to 50 individual sea stars per 100 square metres of seagrass habitat. Individuals may vary in appearance, and differ in colour, number of arms, and arrangement of knobs, which are thought to play a role in defending the Knobbly Sea Star from predatory fishes. It appears to feed heavily on microbial films and tiny creatures living on seagrasses and in the sediment, but it has also been known to consume smaller marine animals such as sponges, corals, sea anemones, molluscs, and echinoderms, as well as scavenge on carrion and decaying plant matter. Threatened by habitat loss, and now considered locally Endangered, scattered remnant populations still exist in shallow waters around Pulau Semakau, Cyrene Reef, Chek Jawa, Pulau Sekudu, Beting Bronok, among others. Sadly, because juveniles have yet to be recorded for most of these shores, it is not known if all of these locations contain self-sustaining, reproducing populations. Elsewhere in the region, widespread and intensive collecting for the trade in dried sea stars as souvenirs may have a significant impact on the species.

Mud Lobster (Thalassina sp.)
This extremely shy crustacean lives underground in the back mangroves, where it excavates an extensive network of tunnels while feeding on organic matter in the mud. All this digging creates large volcano-like mounds that may reach up to 2 metres in height! Many other mangrove creatures end up using this network of mounds, burrows, and tunnels. The tunnelling brings organic matter from deep underground to the surface, and also allows oxygen to penetrate the otherwise oxygen-poor mud. Some mangrove plant species appear to benefit from Mud Lobster activity, and are often found growing on and around their mounds. As a result, the Mud Lobster is seen as an important component of the mangrove ecosystem.

Coastal Horseshoe Crab (Tachypleus gigas) & Mangrove Horseshoe Crab (Carcinoscorpius rotundicauda)
The four living species of horseshoe crabs are often called prehistoric survivors, as fossils very similar to the modern-day species have been found in rocks that predate even the Mesozoic, when the dinosaurs evolved. These bizarre arthropods are not crustaceans, and hence aren’t actually crabs. Instead, they belong to another group called the chelicerates, which also includes arachnids such as spiders, scorpions, and mites. They are harmless; the long tail (also called a telson) is often mistaken for a dangerous weapon, but is mostly used as a rudder to steer the horseshoe crab when it’s swimming underwater (often upside down), or as a lever to right itself if it’s been flipped over. Horseshoe crabs feed on other benthic organisms, including tiny worms, molluscs, and crustaceans, and will also scavenge. Food is ground up using thick bristles at the base of the legs, where the mouth is also located. Horseshoe crabs are often encountered as breeding pairs, with the smaller male clinging to the carapace of the female with enlarged front legs. Sadly, they are heavily collected in many parts of their range for human consumption, and in recent years, for pharmaceutical use, as an extract from horseshoe blood is used in testing for bacterial contamination of pharmaceutical products and medical equipment. Locally, habitat destruction is a major threat, while entanglement in fishing gear such as abandoned fishing nets and fishing lines takes its toll as well.

Two species of horseshoe crab are found in Singapore, differentiated mostly by morphology and habitat preference.

The Coastal Horseshoe Crab tends to be greyish-coloured, grows to a larger size, and has a tail that is triangular in cross-section with a serrated upper edge. It has been seen at locations such as Changi, East Coast Park, Pulau Ubin, and Sentosa, and is found mostly along sandy shores, often close to reefs and seagrass beds. Widespread coastal reclamation and other development works have led to this species becoming locally Endangered. In other countries, the roe of this species is consumed, and has led to overexploitation.

Smaller, more brownish in colour, and with a tail that is rounded in cross-section with a smooth upperside, the Mangrove Horseshoe Crab is found mostly in mangroves and mudflats, but may also be found in nearby areas with silty or other soft substrates. Locations where this species has been recorded include Pulau Ubin, Kranji, Sungei Buloh, and Mandai Mudflats. In fact, the mudflats of northwestern Singapore are an important breeding ground for this locally Vulnerable species. Consuming the roe of this species can be a fatal mistake, as the Mangrove Horseshoe Crab can contain lethal amounts of tetrodotoxin, the same toxin found in pufferfishes!

These were some of the many specimens featured at the recently-concluded Festival of Biodiversity, which was held at VivoCity over the weekend.