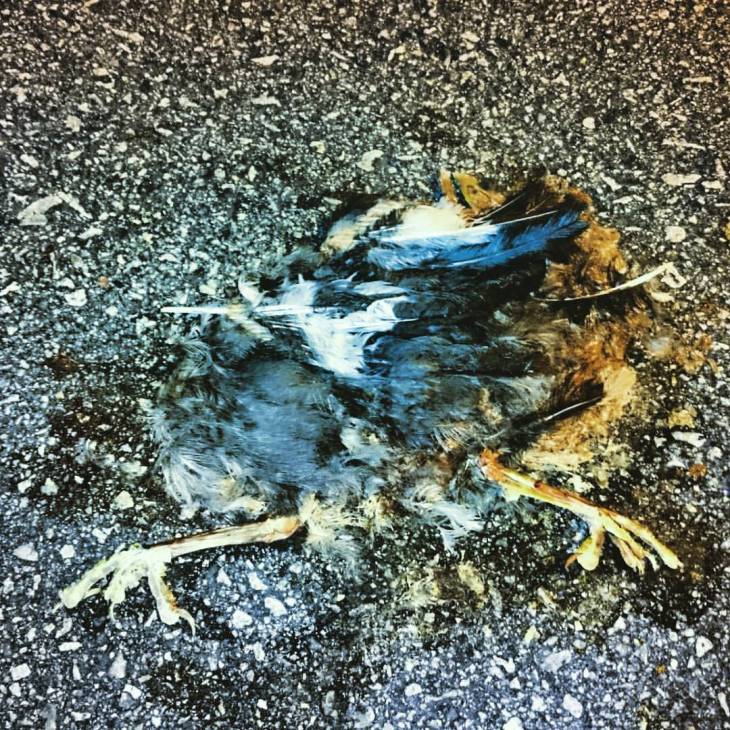 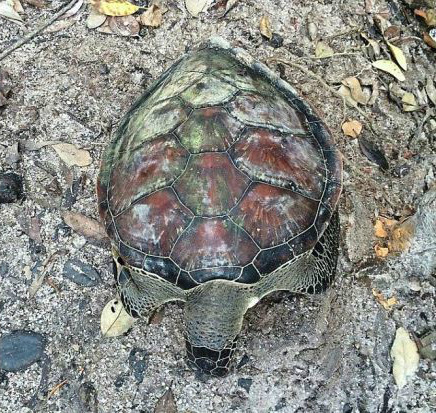 Cruel fate: The carcass of a young Turtle found by Sharifah Ruqaiyah on an island in Terengganu where fishermen used to dump the dead animals.
Photo: WWF-Malaysia

A total of 90 Turtles were found dead this year after getting entangled in the ’pukat pari’ (ray fishing nets), said Terengganu Fisheries Department director Nawawi Ali.

He said following the situation, the department destroyed 40 units of the net and would take legal action against individuals who flouted the regulations.

“Although the death rate among Turtles is high, it is still (considered) balanced as we’re able to produce 500,000 hatchlings out of 600,000 Turtle eggs incubated this year,” he said.

Nawawi was speaking to reporters after handing over school assistance to the orphans and children of fishermen at the Malaysian Academy of Fisheries in Cendering, near Kuala Terengganu today.

He said there were 60 Turtles found dead last year due to its low rate of Turtle landing compared to this year.

Most of the turtles which landed and laid eggs in the state were the Green Turtles (Chelonia mydas) while the Leatherback Sea Turtle (Dermochelys coriacea) were no longer in the picture since the past several years, said Nawawi.

He added Pantai Jakar in Kemaman had become the nesting location for these Turtles compared to other beaches before this, such as Pulau Redang, Pulau Perhentian and Ma’daserah (Dungun). 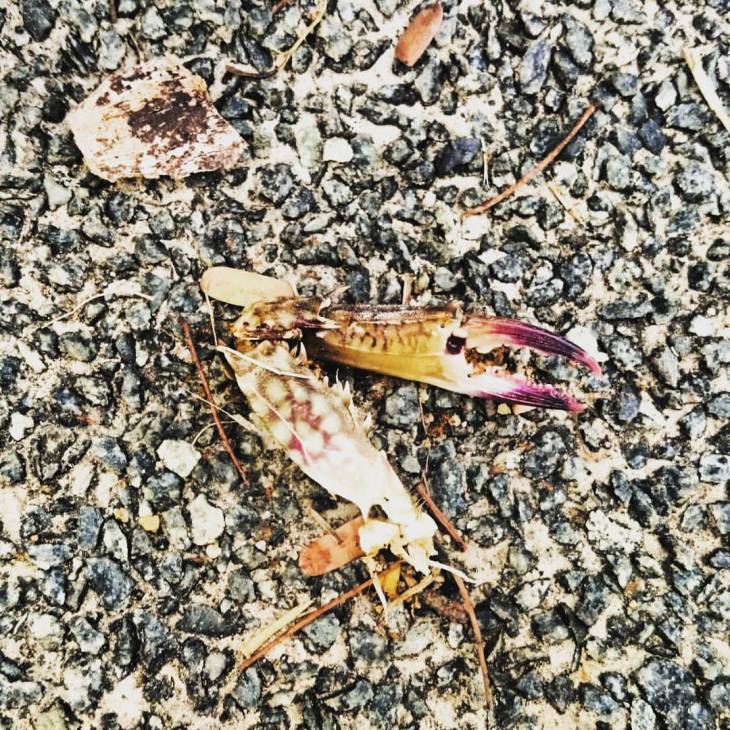 “We found the Bear’s chest cut open, indicating the perpetrator took its enzyme-rich gallbladder intending to sell it,” Ketut, the national park’s security patrol representative, said in a statement on Tuesday (27/12).

Ketut explained that the Bear was likely tortured before its death as it was initially trapped by a sling iron. The perpetrator then appeared to have pulled out all of its teeth and claws with force. This was to get the Bear’s adrenaline flowing, which in turn makes its bile sac enlarge.

“The Bear was tortured to extract its enzymes. We suspect that the enzymes would then be sold on the black market, where they are worth millions,” Ketut added.

The national park’s security patrol team found that the offender also took the Bear’s teeth and claws to be sold illegally.

Poaching is rampant in the national park. Our team often finds abandoned animal carcasses, the result of hunting in the area,“ the officer stated. The team previously found several Porcupine (F. Hystricidae) and Mousedeer (Tragulus spp.) carcasses, as well as Deer (F. Cervidae) legs, which were discarded after their meat was taken by hunters.

The Bear carcass discovery proves that hunting protected animals is becoming too common and increased action and attention from law enforcement is needed to prevent this.

Sun Bears are protected under Indonesian law and are listed as "vulnerable” in the International Union for Conservation of Nature’s Red List of Endangered Animals. 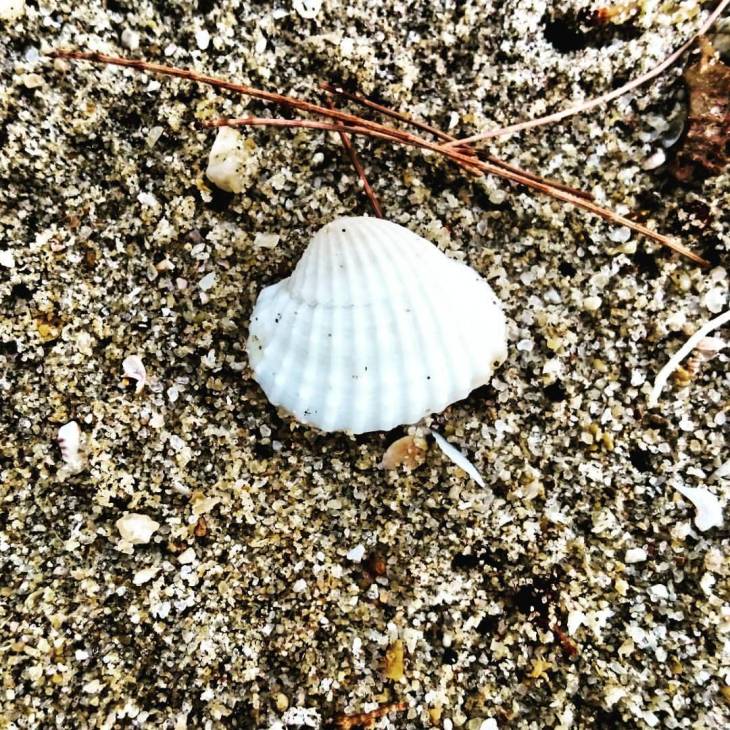 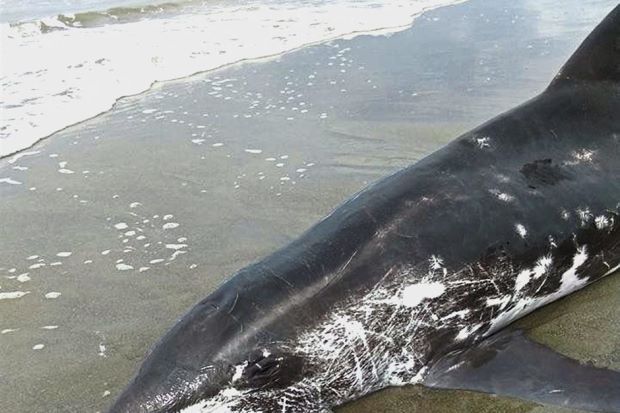 The Rough-toothed Dolphin that was washed into Kampung Pintasan shore in Kota Kinabalu on Christmas eve.

Dolphin may have died from fishing hook infection
27th December 2016;

The Rough-toothed Dolphin (Steno bredanensis) that washed onto the shore of Kampung Pintasan was likely to have died due to infections caused by indigestion after it consumed a squid attached on a hook.

Sabah Wildlife Department assistant director Dr Sen Nathan said that an eight-inch long hook attached to a squid was found embedded in the stomach of the male adult Dolphin during the post-mortem.

“It caused severe trauma and other complications and it died of septicemia (infection) and starvation as it could not eat properly or digest its food,” he said yesterday.

Dr Sen said it could be possible that the Dolphin had suffered for at least a month before it died.

“It’s sad to see such a beautiful marine wildlife lose its life due to possible human folly even if it was caused indirectly,” he said.

It was possible the Dolphin could have bitten into the squid attached to a hook from an angler or fishermen, he added.

The department’s director Augus­tine Tuuga said it sent its wildlife rescue team to the scene after a Facebook user highlighted the pre­sence of the Dolphin carcass along the shore of Kampung Pintasan on Christmas Eve.

Witnesses who see this kind of marine mammals beaching can call the department hotline at 012-801 9289 or send an email to rhinosbh@gmail.com. 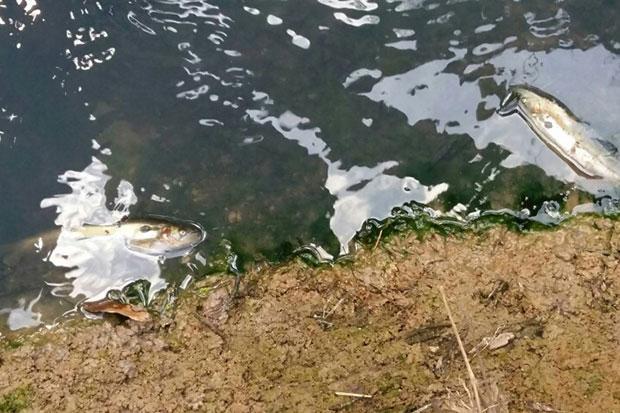 Dead fish float in water fouled by untreated waste discharged from the Unitex Rubber Co factory in Rayong’s Klaeng district. The factory has been ordered closed for 15 days and told to improve the waste treatment system.
Photo: Jumphol Nikomruk

Authorities have ordered the temporary closure of a latex rubber factory for 15 days for discharging untreated waste into a canal, killing many fish and polluting the water source.

Action would also be taken against executives of the factory for releasing waste into a public canal in tambon Thang Kwian, causing a huge number of fish deaths.

The move follows complaints from nearby residents that the factory had dumped toxic waste into the canal, causing a foul smell and killing the aquatic life.

They confirmed the factory, which purchased 50 tonnes of latex a day, had illegally discharged untreated waste into the community’s water source.

The photo of the dead fishes isn’t very clear, but the casualties shown could be a species of catfish from the family Siluridae known as Ompok siluroides.

An adult male Rough-Toothed Dolphin (Steno bredanensis) that was found washed ashore at Kampung Pintasan, near here on the night of Christmas Eve, had an eight-inch squid jig embedded in its stomach.

The multi-hooked jig caused severe trauma and other complications, said the Sabah Wildlife Department in a statement Monday.

“The Dolphin died of septicaemia and starvation as it could not eat properly or digest its food,” said Dr Sen Nathan, Assistant Director of the Department.

“Our WRU (Wildlife Rescue Unit) team reached the site and brought the carcass to Kota Kinabalu for a post mortem and what we found out was quite sad,” said Dr Sen.

He added it is always sad to see such a beautiful marine wildlife lose its life due to human folly, even if it was indirectly done.

“I would like to also advice the general public that if they do come across these kind of marine mammal beaching in the future, do give SWD a call at 0128019289 or email us at rhinosbh@gmail.com,” he added.

Meanwhile, SWD director, Augustine Tuuga said they were alerted of the discovery of the fresh carcass by Ms Kristy Inus, a New Straits Times journalist.

“She said that there was a Facebook posting about this ill-fated Dolphin beaching at Kampung Pintasan an we immediately dispatched our WRU to investigate and to find out what happened to the Dolphin,” said Tuuga.

“Though it was Christmas Eve, WRU always has a team on standby to attend to these kind of cases,” he added.